The aim of the journal is to establish a line of communication with this region of Europe. Previously isolated from the European mainstreams, the Balkan and Black Sea regions are in need of serious study as countries no longer ‘at the edge’ of Europe. The field covers contemporary and twentieth century developments in the wider Balkan (for our purposes- Albania, Bulgaria, the successor states of the former Yugoslavia, Greece, Romania and Turkey) and the Black Sea area. Most of these countries have been neglected for some time by mainstream social science but are increasingly included in existing programmes of university study. The principal disciplines covered are politics, political economy, international relations and modern history; other disciplinary approaches will be accepted, as appropriate.
The journal “Southeast European and Black Sea Studies” is the official journal of ELIAMEP, published four times a year by Taylor & Francis Group (Routledge Journals, London). The journal “Southeast European and Black Sea Studies” has been included in the ISI Social Science Citation Index (SSCI). Starting from the issues published in 2007, our publication will be indexed and abstracted in the following: The Social Sciences Citation Index®; Social Scisearch®; and the Journal Citation Reports/ Social Sciences Edition. The Journal received its first Impact Factor in 2010. 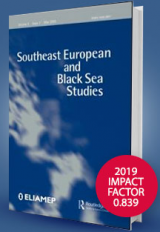