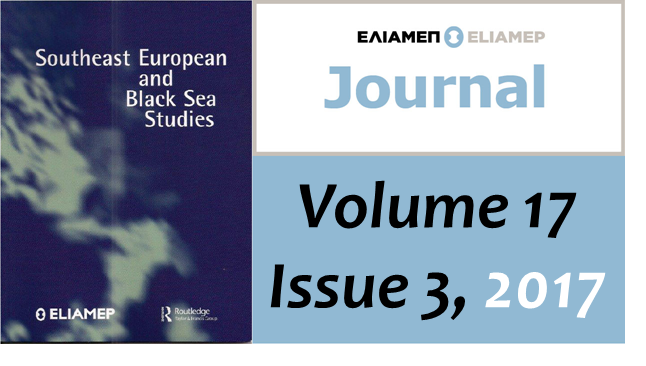 The latest issue of Southeast European and Black Sea Studies is now available online. This issue contains diverse articles and book reviews. Cristiano Bee & Ayhan Kaya contributed a detailed articled titled “Between practices and demands: ambiguities, controversies and constraints in the emergence of active citizenship in Turkey”. Vasile Rotaru & Miruna Troncotă also co-authored the article “Continuity and change in instrumentalizing ‘The Precedent’. How Russia uses Kosovo to legitimize the annexation of Crimea”. Gianfranco Brusaporci’s contribution to this issue is “The impact of EU multi-level regionalism strategy on Bulgarian local authorities: qualitative comparative analysis among nine border areas”. Further articles include “A painful break or agony without end? The stateness problem and its influence on democratization in Croatia and Serbia” by Filip Milačić, as well as the “Quality of democracy in unrecognized states: lessons from Northern Cyprus” by Direnç Kanol & Nur Köprülü. There are two Kosovo-centered pieces encompassed in the issue, namely “Issues of local ownership in Kosovo’s security sector” by Florian Qehaja & Iztok Prezelj and Shqipe Mjekiqi’s questioning examination of “How do MPs in Kosovo develop constituency links? A comparison of MPs’ behaviour under closed-list and open-list PR electoral systems”. Moreover,  Ionela Vlase & Ana Maria Preoteasa contributed an article on “Romanians’ current perception of threat from immigrants in a context of co-ethnic migration: assessing the role of intergroup conflict and active/passive contact”, while “Between national and European foreign policy: the role of Latvia and Romania in the EU’s policy towards Central Asia” was written by Fabienne Bossuyt.  The issue includes the historic overview article “Monitoring the rise of a radical force: the British Embassy in Athens and the Ascent of the Greek Panhellenic Socialist Movement, 1974–1981” written by Lykourgos Kourkouvelas. This newest issue is also comprised by various book reviews, such as Tamara Pavasović Trošt’s take on the book “Divided we stand: discourses on identity in ‘First’ and ‘Other’ Serbia. Social construction of the Self and the Other”. Andrew Wachtel has also written a review on “Post-Yugoslav constellations: archive, memory, and trauma in contemporary Bosnian, Croatian, and Serbian literature and culture”. This issue ends with Jasmin Mujanović’s contribution regarding the “The Europeanisation of citizenship governance in South-East Europe”.