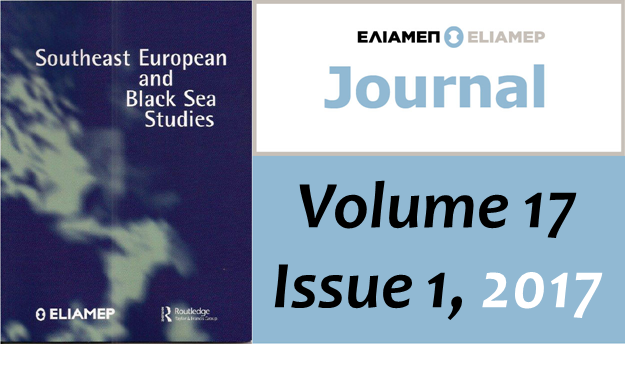 The first 2017 issue of Southeast European and Black Sea Studies includes a diverse selection of articles regarding the Balkan region and Turkey. George Mavrommatis has written a piece about “The Greek migrant integration policy and its transformation during the crisis” and Filip Ejdus & Mina Božović have examined the topics of grammar, power and content in their article about “Securitization of the 2010 Belgrade Pride Parade”. The region of Turkey is a special section of this issue, with an introduction provided by Cristiano Bee & Ayhan Kaya about the “Determinants of young people’s civic and political participation in Turkey”. Volkan Yılmaz analyses “youth welfare policy in Turkey in comparative perspective” through the case of ‘’Denied Youth Citizenship’’ and Emre Erdoğan & Pınar Uyan-Semerci raise the question of whether being young matters in Turkish society in their piece about “young citizen’s political participation in Turkey”. Stavroula Chrona & Tereza Capelos examine in their article “The political psychology of participation in Turkey”, while Suna Gökçe-Kızılkaya & Özge Onursal-Beşgül turn to “Youth participation in local politics” through city councils and youth assemblies in Turkey. Also in this issue Didem Çakmaklı has written a piece on the “Rights and obligations in civil society organizations in Turkey” and last but not least, Cristiano Bee & Ayhan Kaya focus on “Youth and active citizenship in Turkey”. Outside the theme of Turkey, This issue also features four thorough book reviews. Robert J. Donia writing about “The Ottoman Empire and the Bosnian Uprising: Janissaries, modernization and rebellion in the nineteenth century”; Ekavi Athanassopoulou considering “Turkey’s entente with Israel & Azerbaijan: state identity and security in the Middle East and Caucasus”; Anna Calori on “Nations and citizens in Yugoslavia and the post-Yugoslav States – one hundred years of citizenship”; and finally Christos A. Frangonikolopoulos reviewing “Economic crisis and civil society in Greece: new forms of engagement & ‘deviations’ from the past”.

Visit here the website of the publisher for more information.