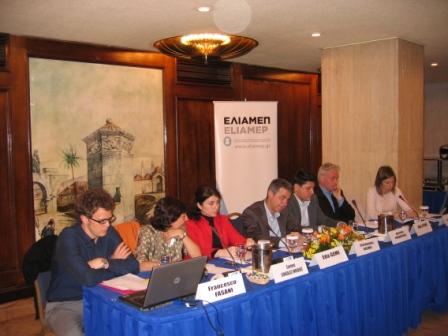 A topical question that has arisen during the last months is whether and how irregular migration stocks and flows are affected by the current economic crisis. The current economic and financial crisis is probably yet to reach its highest peak, however a stagnation of economic activity and rising unemployment have been felt by several countries all over the world. The overall negative climate clearly affects both migrant and native workers.
These are some of the thoughts with which Anna Triandafyllidou, Clandestino workshop coordinator has introduced the Roundtable on Irregular Migration and the Global Economic Crisis organized within the Clandestino workshop on Irregular Migration and Informal Employment in Europe on 27 April 2009, in Athens.

Although the CLANDESTINO workshop and roundtable has raised more questions than it could provide answers it did reach some important conclusions that are of relevance for policy makers and civil society actors:

2. Overall the impact of the economic crisis in terms of flows between source and destination countries is uncertain and very difficult to measure because of lack of data and because a time lag is necessary for the crisis to shape flows.

3. The Clandestino workshop suggests that there have been policy developments in some countries reducing legal flows and seeking to encourage return migration with few results so far.

In other terms, the situation is more complex and more fluid than that: first because the crisis affects in different ways different categories of immigrants and their families, and second because job prospects and wages are probably worsening in source countries too keeping thus the comparative profit from migration similar to the pre-crisis period. It might be logical to assume that the negative economic climate would lead to a reduction of migration inflows towards developed economies as well as a growth in return migration flows. The assumption is that some immigrants will be motivated to return to their home countries while less immigrants will be inclined to move given the negative prospects as regards employment and wages.

It may seem logical to assume that long term settled migrants and their families will be affected by the crisis in ways similar to those of natives. They are not subject to losing their papers if they lose their jobs and they are unlikely to move because of the crisis. Migrants who are undocumented though and mid-term migrants, notably those who have been staying in the destination country 5 years or less and/or whose legal status is insecure or who have left their families behind are more likely to consider going back.

Furthermore, the decision to return is further affected by two factors: on one hand, the pressure from their families back home to keep sending remittances and, on the other hand, the job prospects in the source country upon return. If the former are high and the latter are low, these immigrants are more likely to stay in the destination countries and accept worse working conditions, lower wages, even periods of unemployment. Those who may lose their papers because of lack of employment may also consider staying and going underground, working in the informal market if there are few prospects of economic survival when they go back and especially if prospects of then returning to the destination country are bleak because of migration restrictions in developed economies.

(1) The media have been reporting dire competition for jobs between native and migrant workers (the title of a news story in the Italian newspaper Corriere della Sera published in the Sunday, 22nd March edition was eloquent: Italians want the migrants’ jobs back) as well as between legal and irregular workers especially in sectors like construction, which have experienced the crisis in more acute ways.

See the programme of the Workshop.