EU-Turkey Relations and Irregular Migration: Transactional Cooperation in the Making 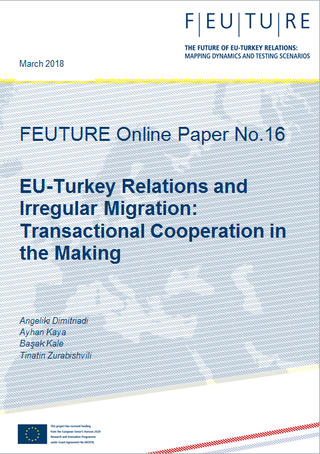 The aim of the paper is twofold. First, to outline the relationship of the EU and Turkey in the field of irregular migration and present the main drivers that underpin the relations from 1999 to 2017. While acknowledging that emphasis on irregular migration is given particularly post-2011, the paper argues that the dynamics characterising the relationship between Turkey and the EU do not change significantly in the pre-and post-2011 period. Secondly, the paper presents the most likely of the three scenarios – conflict, cooperation, and convergence – in the area of irregular migration drawing from the drivers of the past and present in the EU, Turkey, but also the Southern neighbourhood and beyond. The paper argues that though conflict is unlikely, equally so is convergence, with a model of transactional operational cooperation more likely and reflective of EU-Turkey relation on irregular migration management.

This project has received funding from the European Union’s Horizon 2020 research and innovation programme under grant agreement No 692976.