Analysis: Greece, the Mediterranean, and the Black Sea 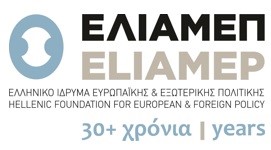 Greece has regional interests that go well beyond its immediate region. Therefore, although Southeastern Europe and relations with Turkey will continue to be Greece’s top foreign policy priorities, the importance of the Mediterranean and the Black Sea will continue to grow, either at the regional or the transatlantic level. Indeed, because of the increasing attention and involvement of Europe and the United States in the Mediterranean and the Middle East, as well as the Black Sea and the Caucasus, Greece could be a leading stakeholder in this process of strategic adaptation and globalization. This would require, of course, a more active foreign policy.

Strategic importance of the Mediterranean.
The Mediterranean and the Middle East, in both the narrow and the wider sense, are regions where the West in general, and European Union (EU) countries in particular, have a number of vital or core interests, including energy security (from North Africa and the Persian Gulf, and, in the near future, from the Caspian Basin), regional stability, containment of religious extremism, prevention of mass migration, and the protection of Israel and other friendly regimes.

There is no single, agreed definition of the political and geographic  boundaries of the Middle East. For the purposes of the EU’s Euro-Mediterranean Partnership (EMP), the Mediterranean has been geographically defined as including all littoral states (although Libya for political reasons has so far been excluded from the EMP), but excluding the Balkan states (Albania and the states of former Yugoslavia).

For the past few years, this narrow definition appears to be making less and less sense as intra-state relations and security problems are increasingly cutting across regions and as various initiatives reach over traditional Mediterranean frameworks to embrace a larger strategic space. Many analysts argue that the most accurate way to describe this broader region would be to add to the inner core of the Middle East North Africa, the Levant, Turkey, Sudan, the Persian Gulf region, and the Horn of Africa), the Transcaucasus (South Caucasus), west Central Asia, and South Asia.

The area stretching from the Western Sahara to Central Asia and the Persian Gulf, and the Mediterranean itself, contains a sizable number of flashpoints capable of imposing demands on Allied diplomacy and military power. Although the Palestinian-Israeli conflict and the future of Iraq are the most important outstanding issues, fluidity, instability, multiple sources of insecurity, and continued change and evolution are the predominant characteristics of the Mediterranean security environment. Accordingly, increasing stability in this region should be a high priority for Europe and the United States.

There is an emerging consensus that the region is highly heterogeneous. At a minimum, two – rather loosely defined – regional sub-systems can be identified: Eastern Mediterranean (Mashreq), with predominantly “hard” security problems, and Western Mediterranean (Maghreb), with “soft” security problems. Still others describe the Mediterranean as a multifragmented region. In any case, it is difficult to examine the Mediterranean, from a security perspective, in isolation from developments in the surrounding regions of Transcaucasus/ Central Asia, the Balkans, the Black Sea and the  Middle East, including the Persian Gulf.

Greece’s policy towards the Mediterranean.
Greece is located at the crossroads of three continents (Europe, Asia, and Africa). It is an integral part of the Balkans (where it is the only country that is a member of both the EU and NATO, at least until Bulgaria and Romania join the EU in 2007 or 2008), and it is also in close proximity to the Black Sea and the oil-rich regions of the Middle East and theCaucasus.

The Aegean Sea is an important shipping route, connecting the Black Sea with the  Mediterranean, and a major transit route for the transportation of energy products (especially after the construction and operation of pipelines from Central Asia and the Transcaucasus). Furthermore, Greece’s position in the Eastern Mediterranean enhances its strategic importance. The Mediterranean region constitutes a crucial area of contact (a “fault line”) between what is described by many analysts as the emerging great division of the world: the North and the South.

Despite being a Mediterranean country, Greece’s involvement in the region has been quite limited. Because of other foreign policy priorities (the perceived threat from Turkey since the mid-1970s, as well as Balkan instability in the 1990s), its participation in activities and initiatives in the context of the EMP has been less than active (and despite the fact that Greece has been strongly pro-European since its accession to the EU, and since the mid-1990s it has become more actively involved in the internal and external evolution of the EU). In fact, because of Athens’ concern about the perceived Turkish threat, she had on a number of occasions vetoed financial assistance to Turkey in the context of Euro-Mediterranean cooperation. As a result, assistance to other Mediterranean countries was also blocked, resulting in temporary tension in Greece’s relations with those countries.

However, in the late 1990s and early twenty-first century, in the context of North-South relations, Greece slowly became more actively involved in the shaping of EU’s Mediterranean policy on the basis of its traditionally good relations with Arab countries and its recently – if belated – improved relations with Israel (and it has played a minor role in the peace process by hosting meetings between Israelis and Palestinians during the early years of the Oslo Peace Process).

The Greek position is that because of the synergistic effect of security problems in the Mediterranean, it is felt that such problems can be dealt with, contained and eventually resolved only in a holistic manner. Issue-oriented solutions or single-dimensional approaches (for example, the use of military force without any economic “carrots”) would be rather ineffective. Therefore, it is believed that among existing initiatives and involved organizations in the Mediterranean, only the Barcelona Process (the EMP), despite its current limitations and slow progress, has the potential to deal with such problems (especially those of a “soft” type).

Recognizing that the security of Europe and of the (southern) Mediterranean are closely linked, and because Europe has a number of vital interests in the Mediterranean, the Greek security elite perceives the security basket of the EMP as a general framework for various confidence-building measures. The objective is two-fold: (a) to stabilize the South (and in conjunction with the economic basket) contain and eventually resolve problems such as migration, and (b) to reduce misperceptions and promote a substantive dialogue and a better understanding between the two shores of the Mediterranean and eventually develop a common security culture.

The economic dimension of the Barcelona Process has – unfortunately – been considered as a low priority for the Greek government, which considers the Balkans as the main region for investment and economic activity for Greece. The same is true of the private sector, which had little support from the government.

Strategic importance of the Black Sea.
As Leonid Poliakov put it, “With Cold War ‘artificial’ barriers removed, the Black Sea Region has found itself once again on the intersection of different cross-border activities, both in a positive sense, like commerce, tourism and energy transportation, but also in a negative sense, as natural juncture between places of criminal demand and criminal supply. Indeed, it is the region’s growth as a transit area that is most threatening. At the core of this threat is the growth of transnational criminal networks, which have firmly established themselves within the region, taking advantage of the security vacuum, ethnic conflicts and separatism, weak democracies and increasing trade.”

The energy dimension is extremely important. Oil and natural gas is and will continue to be a major factor in regional and international politics. The consensus view suggests that Caspian resources will provide an important new long-term source of energy for world markets, although still less significant than other Middle Eastern sources and far from the transforming development that early analyses implied. The United States and Europe will continue to depend largely on the Persian Gulf and North Africa for much of their energy supplies. But the Caspian Sea will be important, and Russia will continue to be an indispensable source of natural gas for Europe.

Greece’s policy towards the Black Sea.
In addition to further developing bilateral political and economic relations  with Black Sea countries such as Georgia, Ukraine and Armenia, and, of course, Russia, Greece considers the EU to be the main instrument for the stabilization and development of the Black Sea. At the moment, the EU remains more distant from the Black Sea. It will not even have a physical presence on the Black Sea until Bulgaria and Romania (with which Greece is planning to create a “Battle Group” in the context of the European Security and Defense Policy, ESDP) become members in 2007 or 2008.

Turkey has only commenced EU accession negotiations, with the prospect for membership in the distant future. Prospects for Ukraine and Georgia appear even further away. However, after the decision to extend Europe’s Neighborhood Policy to Georgia, Azerbaijan and Armenia, all the countries on the northern and eastern shores of the Black Sea – including Russia, Ukraine and Moldova – will be engaged in developing closer (albeit inherently different in depth and nature) relations with the EU.

The critical issue here is the definition of what constitutes “Europe” and the “Euro-Atlantic community” and how far membership to NATO and the EU could or should extend. The key question is not only whether it is desirable, but also whether it is achievable.

Finally, Greece has also been active in the context of the Black Sea Economic Cooperation Initiative (BSEC), whose research institute is based in Athens and its development bank in Thessaloniki. Although it is claimed that there is a certain lack of regional identity, regional cooperation is an important element and any initiative must be (or at least be seen as) “locally developed and owned” and not imposed from the outside. The BSEC has made some limited progress in promoting regional cooperation, but clearly much more needs to be done.

Dr. Thanos Dokos is Director of Studies at ELIAMEP.