EUact2-“Towards Democratic and Inclusive Europe: EP Elections and Active Citizens Participation and Contribution” is a two-year project funded by the European Union. It will encourage democratic participation of citizens, especially young people, as well as examine young people’s attitudes toward the EU and the extent of their political involvement. In addition, EUact2 seeks to deepen citizens’ understanding of the EU and their awareness of rights and values, to increase the democratic legitimacy of the EU decision-making process and make insightful recommendations to EU policymakers. The project has a dual focus: first, to enhance participation in the EP elections in 2024 and second, to develop sustained active civic participation.

In the context of EUact2, 31 activities will take place, involving citizens, especially young people, experts, EU policymakers, representatives of NGOs, and media, primarily but not only, from Austria, Greece, Ireland, and Slovakia.

The consortium members include GLOBSEC, European Movement (EM) Ireland, and the Institute for the Danube Region and Central Europe (IDM).

ELIAMEP will organize two focus group discussions on European democracy and the role of youth in it; one public event on the role of the EP in the European integration process and the importance of the EP elections; two small debates on digital transformation and social justice as well as on EU’s role as an external actor; and two online public events on the New Pact for Migration and democracy and rule of law within EU.

Institute for the Danube Region and Central Europe (IDM)

Kick-off event of the project EUact2 project: Democracy in the EU Amid a Poli-Crisis: Perceptions Across Europe, 19/10/2022 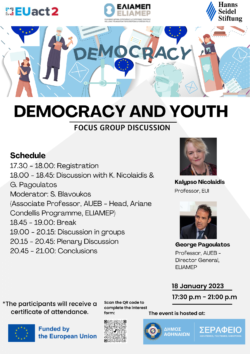