A European Strategy for the Southern Caucasus 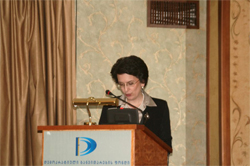 Participation and speech of Janis A. Emmanouilidis, Stavros Costopoulos Research Fellow at ELIAMEP, at a conference entitled A European Strategy for the Southern Caucasus. In the course of the conference an international group of participants discussed (i) the consequences of the war between Georgia and Russia in August 2008, (ii) the state of affairs and future challenges for democratic transition in the region (Armenia, Aserbaidschan and Georgia), and (iii) the options for future cooperation between the EU and the Southern Caucasus.

The list of speakers included also inter alia Temuri Yakobashvili, Georgian Minister for Reintegration, Varta Oskanian, former foreign minister of Armenia, Peter Semneby, EU Special Representative for the South Caucasus, Sozar Subari, Public Defender of Georgia, Hansjörg Haber, head of the European Union Monitoring Mission (EUMM) in Georgia, and Irina Kobrinskaja, Institute of World Economy and International Relations, Moscow. Nino Burjadnadze, director of the Foundation for Democracy and Development and former speaker of the Georgian Parliament, held a dinner speech in which she stressed the need for the EU to remain strongly engaged in Georgia.

In general, the participants of the conference held that the EU and especially President Nicolas Sarkozy representing the French EU Presidency played a decisive role in brokering a ceasefire between Georgia and Russia following the hostilities in August 2008. Both sides had highly welcomed the quick and active engagement of the EU and valued the European Union’s role as an honest broker. The overwhelming majority of participants stressed the need for the EU to continue and even reinforce its engagement in the region. In this respect, there was however some disagreement concerning the prospects of the EU’s new initiative of an Eastern Partnership, which will particularly focus on the relationship between the EU and six of its Eastern European partner countries, namely Armenia, Azerbaijan, Belarus, Georgia, Moldova, and Ukraine.

The conference was organized by the Regional Office South Caucasus of the Heinrich Böll Foundation and the Bertelsmann Foundation and took place in Tbilisi, Georgia on 6/7 November 2008. The conference will be followed by a series of further meetings in the region as part of an initiative dedicated to produce “A European Strategy for the Southern Caucasus”.

A European Strategy for the Southern Caucasus: Programme

A European Strategy for the Southern Caucasus: List of Participants