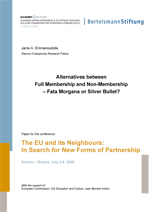 Paper prepared by Janis A. Emmanouilidis, Stavros Costopoulos Research Fellow at ELIAMEP, for the conference The EU and its Neighbours: In Search of New Forms of Partnership organized by ELIAMEP and the Bertelsmann Foundation in Sounio between July 3-6, 2008.

The paper argues that the EU faces a double challenge: On the one hand, the Union needs to provide the neighbouring countries with a more attractive offer in order to make sure that EU conditionality continues to be effective. On the other, it needs to acknowledge the widespread doubts about further rounds of widening. Under these circumstances it comes as no surprise that the pressure to explore innovative ways to affiliate EU neighbouring countries beneath the level of a full and unlimited EU membership has increased.

The paper discusses alternative forms of association and integration beneath the level of full membership. It argues that the current level of association between the EU and its neighbours can be extended. However, any form of Association Plus will at some stage reach its limits and loose its attractiveness, if the affiliated country strongly aspires to join the club. In this situation the EU can either (i) deny the neighbouring countries’ wish to go beyond the association paradigm, (ii) open up the classical path towards EU accession, or (iii) look for alternatives beyond an Association Plus. In the latter case the EU will have to offer the neighbouring countries a substantial dimension of EU membership by offering them a say in the Union’s decision-making system. Moving beyond the association paradigm, the EU could offer two alternatives: Partial Membership or Limited Membership.

In the end the papers discusses the prospects of alternative forms of association and integration and identifies four things which would increase the chances that alternatives beneath the level of full membership progress from theory into practice.