Strengths and Weaknesses of the U.S. Immigration System 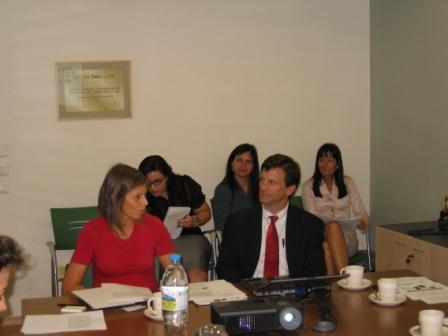 The Hellenic Foundation for European and Foreign Policy (ELIAMEP) and the Public Affairs Section of the U.S. Embassy in Athens, organised a discussion with Mr. Robert Divine, Chairman, Immigration Group of Baker, Donelson, Bearman, Caldwell, & Berkowitz, P.C. on ‘Strengths and Weaknesses of the U.S. Immigration System‘.

The USA, an immigration country par excellence, makes considerable efforts to develop and adapt its migration management and integration policies to the changing international and domestic environment. During the last 10-15 years, the US has adopted an increasingly tough migration control policy with a view to making its US-Mexican green border impermeable to irregular immigrants. The immigration bill put forward by the Bush administration two years ago, proposing, among other issues, the regularization of the estimated 12 million undocumented immigrants that live today in the USA, was eventually abandoned. It is expected though that the Obama administration will have to confront the issue of renewing the country’s migration management mechanisms sooner rather than later.

In the discussion, Mr. Robert Divine, former Chief Counsel of United States Citizenship and Immigration Services (2004-2006), offered a concise overview of the US immigration policy as it has developed since the beginning of the 20th century. He emphasized the existence of different categories of migrants – temporary and long-term, entering the country for work or family reasons. He elaborated on the status and rights acquired through the different types of entry visas and also on the expansive USA naturalization policy. Children born in US territory acquire US citizenship automatically regardless of the citizenship or (legal/irregular) residence status of their parents. Permanent residents apply for and usually receive citizenship after 5 years of stay. Mr. Divine also elaborated on the sanctions for those caught for unauthorized stay or work (which range from 5 years to permanent entry ban to the USA).

With a population of 350 million, the US accepts each year about 1.2 million regular migrants and asylum-seekers or resettled refugees. Mr. Divine noted the ideology behind the migration management policy of the USA notably the idea that the country should ensure that it remains ethnically, racially and culturally diverse (no single nationality can represent more than 7% of the annual entry quota). He noted how this ideology has evolved from a policy or racial preference in the early 20th century to a conscious maintenance of diversity coupled with a strong sense of citizenship. He eloquently used the metaphor of the family to describe the US citizenship ideal: like in a family parents do not distinguish between adopted and natural children, similarly in the USA the state does not distinguish between naturalized and native citizens.

Prompted by the participants to comment on the issue of irregular migration control that Greece and the entire EU is facing and in relation to the CLANDESTINO research project on the topic coordinated by ELIAMEP,  Mr. Divine noted that the USA has implemented several large regularization programs which however have been quite distanced in time (1986, 1990 and the next one is still to come). He acknowledged that there will have to be a new regularization programme some time soon which will affect the estimated 12 million unauthorized residents that live in the USA today but he also paused on the fact that such measures are accompanied, each time, by more restrictive immigration policies.

Employer sanctions has been one policy measure adopted in the USA since 1986 (following the paradigm of France on the issue) in the effort to combat irregular migration and informal work. However, Robert Divine notes that this measure has been only partially successful and actually quite controversial: it has initially led to confusion, employer discrimination towards US citizens with limited English language competence, and eventually identity theft. Measures adopted to improve implementation (e.g. reduction of the number of identity documents that employers can accept, securitization of these documents) have, according to Mr. Divine, led mainly to a burgeoning ‘industry’ of document fraud and identity theft without necessarily having an important impact on informal work as such.

Regarding most recent developments on identity checks and the renewed and digitalized visa system, Mr. Divine noted that the adoption of the 2005 Real ID Act has marked the beginning of a largely controversial process for the establishment of a common national identity card system of national identities for US citizens (Note: the US like the UK has by tradition no federal national identity card and individuals may carry a range of documents to prove their identity). In a very frank attitude, Robert Divine noted that improved migration management and increased security comes at the expense of a semi-police state. This is indeed a political rather than policy dilemma that contemporary western democracies will have to face, he noted.