Greek-Iranian relations & their significance to the European Union 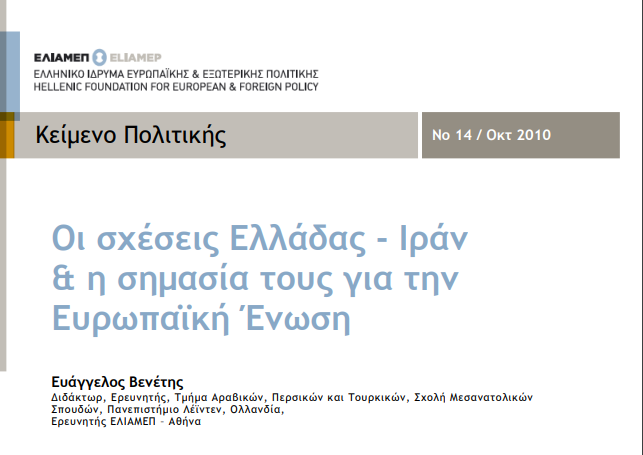 The Policy Paper no. 14 authored by Dr. Evangelos Venetis aims at creating a political action framework encompassing a triptych of countries and organizations which, each of them from its own part, have a particular geopolitical significance in the region of Eurasia, Middle East and East Mediterranean. In this triptych, Greece is suggested for the first time to play a central role as an intermediary country and political actor. The time frame, during which the creation of the abovementioned framework is put forward, is particularly important for Greece, which suffers from ongoing economic crisis, as well as for Iran, which finds itself in direct confrontation with the European Union over a number of issues, but mainly its nuclear programme, and the EU, which is in a stage of forming and systematically applying a foreign policy framework in the Middle East and beyond.
The present paper analyses the basic elements and parameters in pairs of countries and organizations, and submits proposals towards the development of a specific and systematic action vis-à-vis the formation of the above mentioned triptych.

Full text available in Greek only.