MIGSYS studies the links between the migration plans of individual subjects and the migration policies of sending and receiving states. Our contention is that migrants and their households are independent social agents that make choices and plans, execute these plans, and/or adapt them in accordance with changing circumstances and to their own needs and expectations. In formulating and executing their plans, migrants interact with state policies and other external factors operating in the sending, receiving or in both countries.

Such information may be more or less accurate and complete, and is usually mediated through formal and informal networks in the country of origin and in the receiving country, the media, non-state agents (e.g. specialised travel agencies, marriage brokers, NGOs, religious organisations) and criminal networks (human traffickers).

MIGSYS is based on a comparative ethnographic approach. The research consortium studied the migration projects and experiences of several groups of migrants (selected based on ethnicity, country of origin and/or transnational migration networks) in different migration systems. In particular, we took under consideration four systems: 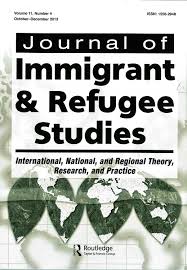 Anna Triandafyllidou - The Governance of International Migration in Europe and North America: Do Migration Policies Meet the Migrants?