Athens EU Model Junior: 96 students debate on the future of the EU! 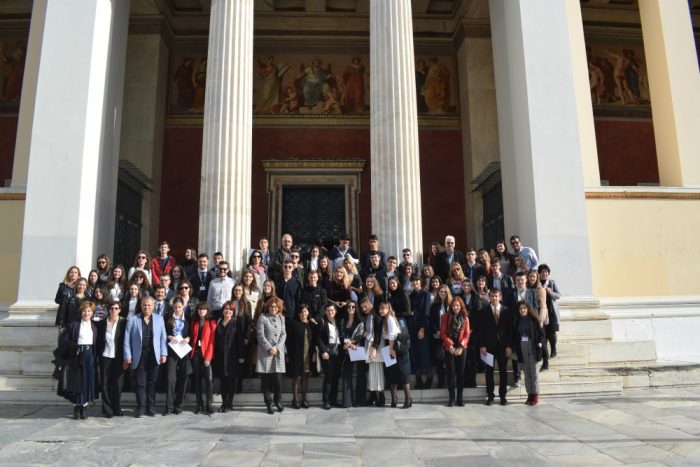 ELIAMEP, together with the Institute for European Integration and Policy at the National and Kapodistrian University of Athens, the Europe Direct Information Centre hosted at ELIAMEP and the Representation of the European Commission in Greece, organized the “Athens EU Model Junior”.

The three-day simulation of two EU institutions: the European Commission and the Council of the EU (specifically the Foreign Affairs Council), brought together 96 students from 16 high schools from all over Greece. Participants were assigned various roles and were tasked with promoting their policy positions and negotiating the management of contemporary refugee and migratory flows. The roles assigned were those of EU Commissioners, Ministers of External Affairs and other officials of the EU (European External Action Service and European Commission’s Legal Service), as well as journalists and representatives of other international organizations (African Union, United Nations High Commissioner for Refugees) and NGOs (International Committee of the Red Cross and Médecins Sans Frontières).

Mr. Georgios Markopouliotis, head of the Representation of the European Commission in Greece, and Director General of ELIAMEP, Professor George Pagoulatos, welcomed the students and teachers, while Associate Professor Emmanuella  Doussis, directress of the IEIP, described in brief the objectives and purposes of the AEUMJ. A mock session shortly followed, ushering the participants into the rules and procedures of the simulation.

The students put themselves in the shoes of EU senior officials and Ministers of the Member States of the European Union. They were also faced with a hypothetical crisis that was announced during the sessions; hundreds of migrants and refugees attempted to cross the Spanish land border with Morocco to the enclaves of Ceuta and Melilla.

The closing ceremony, which took place in the Great Hall of the National and Kapodistrian University of Athens, was moderated by Associate Professor Emmanuella Doussis, directress of the IEIP. Professor Athanasios-Meletios Dimopoulos, Rector of the University, and Deputy Minister of Education and Religious Affairs, Ms. Sophia Zacharaki, delivered an address. Dr. Angeliki Dimitriadi, Senior Research Fellow, Head, Migration Programme at ELIAMEP, commented on the Decision of the Council of Ministers and the Communication from the European Commission. The ceremony was closed by Professor Loukas Tsoukalis, President of ELIAMEP, Professor Sciences Po, Paris, Professor Emeritus, University of Athens.

You can watch the video of Athens EU Model Junior 2019 here.

Photographs from the simulation are available here.

ELIAMEP would like to thank AEGEAN airlines and the FOURLIS Group for their support.

About the Athens EU Model Junior

The aim of this educational activity – which is organized with great enthusiasm and anticipation every year by ELIAMEP, EDIC ELIAMEP and the Institute of European Integration and Policy (IEIP) – is to raise students’ awareness of how the European Union works and how decisions are being made on the supranational level.

This year, the participating schools were the following: