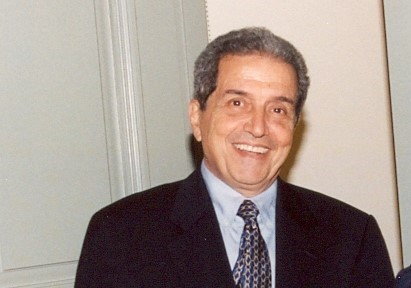 It is with emotion and gratitude that the Hellenic Foundation for European and Foreign Policy (ELIAMEP) community bids farewell to Theodore Couloumbis, Professor Emeritus of the University of Athens. Theodore Couloumbis served as ELIAMEP’s President (1993–95) and Director General (1998–2006), and well as being a member of the Foundation’s Honorary Committee through until the end of his life.

His contribution to ELIAMEP and the Greek international studies community is immeasurable. He was a teacher, friend and mentor to hundreds of his university students and colleagues. A model academic teacher and a man of profound integrity, genuine courtesy and inexhaustible kindness, he also had an inexhaustible and sparkling sense of humour.

Theodore Couloumbis was born in Thessaloniki in June 1935. His father was an artillery officer, his mother a kindergarten teacher. He lost his father in 1941, when he was killed aged just 33 in the Battle of Crete. He grew up with his mother and brother and attended Athens College on a scholarship. He emigrated to the United States to study in 1952; he would live, study and work there for more than 30 years. As he writes in his book 71…74 An academic’s notes (Patakis Publications), the desire to return to Greece was always there in his mind and  in his heart especially, but the military coup of 1967 made this impossible, as he could not work under such suffocating conditions and constant censorship. So he stayed in America and fought the dictatorship from there. Testifying to Congress in July, August and September 1971, he strove to get “a simple but important message” across: “Stop supporting the Colonels! Greece is a country that can offer a genuinely democratic as well as non-communist alternative to the Colonels’ obscurantist and despotic regime”.

His primary research interests included dispute resolution in the international environment, and he worked to bring about a rapprochement between Greece and Turkey based on mutual understanding within the framework provided by international law. He fought all his life for the settlement of international crises. He was a great teacher who filled lecture theatres with his infectious passion. A profoundly modest man, he did not accept positions of power when they were offered to him, always preferring to contribute quietly.

He served as President of the Institute for Balkan Studies (1988–90) and President of the Hellenic Society of International Law and International Relations (1985–87). His recent work focused on dispute resolution in the international environment. He is the author (along with James H. Wolfe) of the well-known textbook International Relations: Power and Justice (Prentice Hall, 4th edition, 1990). He is also the author of the book: The US, Greece and Turkey: The Troubled Triangle (Praeger, 1983) and was co-editor of the Journal of Southeast European and Black Sea Studies co-published by ELIAMEP and Taylor & Francis, London. His most recent books were: The Greek Junta Phenomenon (Pella Publishing Company, New York, 2005) and (as co-editor) Greece in the Twentieth Century (Frank Cass, London, 2003).

Always apt in his remarks, Theodore Couloumbis put the case in recent years for Europe to take the lead in tackling major problems, starting with the causes of military tension. In an article published in Kathimerini on 15/5/2016, he argued that:

The time has come for Europe, and the rest of the developed world, to sound the alarm once more. A purely defensive policy based on regulating (actually, delaying) refugee and migrant flows is no longer enough. What is needed is a proactive strategy that will help restore peace and resolve the disputes in the afflicted areas that are producing desperate refugees. And such a strategy will require meaningful programmes aimed at reconstructing and developing humanity’s war-torn zones […]. It is perhaps even more crucial that the leaders of the world’s privileged states realize that a preventive policy of this sort will cost infinitely less per year in money and human suffering than the destabilization which hundreds of thousands of battered refugees could cause.

He was the author of many articles and books and a regular columnist for the Kathimerini newspaper. He also participated in the meetings of the Hellenic Ministry of Foreign Affairs’ National Council on Foreign Policy from its establishment in 2003 through to September 2006.

In commemoration of Theodore Couloumbis, ELIAMEP has decided to announce a research scholarship for a research publication by a young scholar in the sphere of international relations. Details to be announced soon.