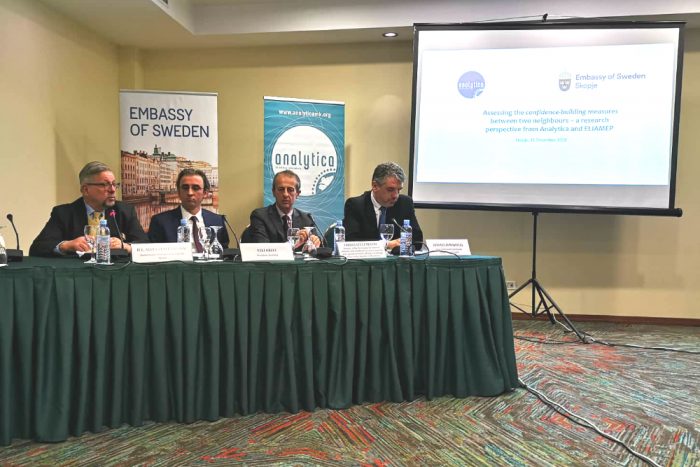 On December 11, 2018 at the Holiday Inn Hotel in Skopje, the South-East Europe Programme of ELIAMEP co-organized with the research institute Analytica and the Embassy of Sweden in the former Yugoslav Republic of Macedonia a presentation of the findings of the joint research project on the development of cooperation between Greece and the former Yugoslav Republic of Macedonia. The report is entitled “Bilateral cooperation between Athens and Skopje in the fields of Justice and Home Affairs (Police): An assessment of the state of play before and after the adoption of the Confidence Building Measures (2015)”.

The research was funded by the Swedish Ministry for Foreign Affairs. The results were presented by the researchers and authors of the research, Yorgos Christidis and Panagiotis Paschalidis. Researcher Magdalena Lembovska presented the results of Analytica’s research.

Opening remarks were given by H.E. Ambassador of Sweden in the former Yugoslav Republic of Macedonia, Mats Staffansson, Ioannis Armakolas, Assistant Professor and Head of the South-East Europe Programme of ELIAMEP, Veli Kreci, President of the research institute Analytica and Goran Stevchevski, Director of the Directorate for bilateral relations with Southeast European countries and regional initiatives, Ministry of Foreign Affairs.

Finally, Ljupcho Petkovski, Executive Director of Eurothink, spoke on confidence-building and co-operation between the two countries after the Prespes Agreement.

You can read the report here.

– Presentation of ELIAMEP’s research on the cooperation between Greece and the Former Yugoslav Republic of Macedonia in “Μακεδονία της Κυριακής” – https://bit.ly/2FvXBdN

– Yorgos Christidis’ interview on the First Programme of the Hellenic Broadcasting Corporation – https://bit.ly/2FFFRfd

– Y. Christidis and P. Paschalidis spoke about South-East Europe Programme’s new report on the cooperation between Greece and the Former Yugoslav Republic of Macedonia – https://bit.ly/2RTy4kl