Discussion ELIAMEP – “The future of Kosovo after Hague”, 12/11/2010 (Ministry of Foreign Affairs) 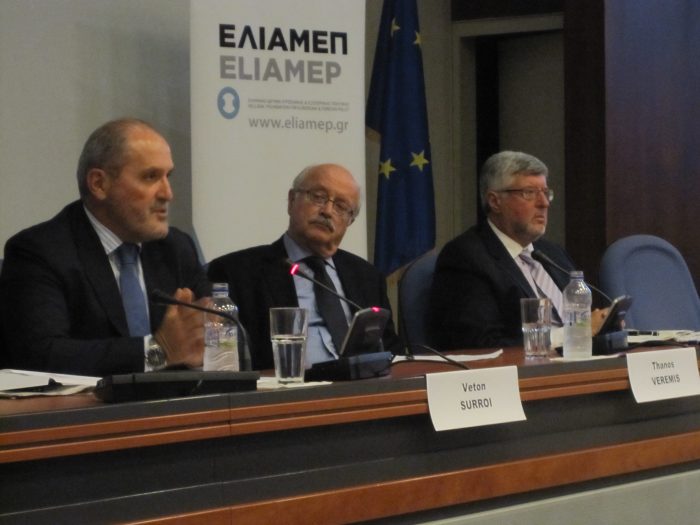 On 22 July 2010 the International Court of Justice (ICJ) concluded that Kosovo’s declaration of independence of 17 February 2008 did not violate general international law and rejected Serbian claims. This Advisory Opinion of the ICJ led to celebrations in Pristina, frustration in Belgrade but also skepticism in the international community as for subsequent developments. In view of its long-standing interest in Balkan politics and attempting to elaborate on the future of Kosovo after Hague, the Hellenic Foundation for European and Foreign Policy (ELIAMEP) organised a panel discussion on 12 November 2010 at the at ‘Yiannos Kranidiotis’ Amphitheatre of the Hellenic Ministry of Foreign Affairs. Speakers included Mr. Veton Surroi (Chairman of the Board, Foreign Policy Club, Pristina) and Ambassador (ret.) Alexandros Mallias (Special Advisor, ELIAMEP). The discussion was moderated by Professor Thanos Veremis (Vice-President of ELIAMEP).

Both Mr. Surroi and Ambassador Mallias agreed that Kosovo’s independence and territorial integrity cannot any longer be put into question. Furthermore, they explained that the UN admission issue and that of EU membership can possibly help the international community in providing adequate political incentives towards a negotiated settlement. Their common diagnosis also was that the whole situation provides a ‘golden opportunity’ for Europe’s Balkan policy in spite of its current division over Kosovo’s recognition.

For his part, Veton Surroi said that the recent ICJ opinion brought the issue from the UN to Brussels. In his view, the EU has to play the role of a negotiator and not only of a mediator, although he did not exclude the possibility of US involvement at some stage. Mr. Surroi considered Kosovo as an ‘unfinished state’ and focused on various practical problems, such as the lack of direct mobile connection networks, as well as on the problems in its northern part. Referring to the negotiation process, he mentioned that Serbia should face ‘hard realities’ which are irreversible and explained that dialogue should not be exploratory in nature.

As for Ambassador Mallias, he placed his talk in an optimistic European context explaining that Serbs and Kosovars will have to live side-by-side as European citizens in the future.  On that basis, dialogue should be called an ‘initiative for the next generation’ dealing with Kosovo’s ‘status within the status’.  In parallel, Ambassador Mallias referred to the ‘Agenda 2014’ initiative being promoted by the Greek government as an indispensable soft -power mechanism for changing attitudes and policies in the Balkans. He, finally, made a clear distinction between the independence of Kosovo and the situation in the occupied territories in Cyprus explaining that the ICJ Opinion of 22 July 2010 does not constitute a precedent.