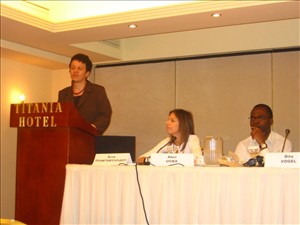 In the introductory session, Dr. Ruby Gropas presented the aim, structure and scope of the POLITIS research project. The following session concentrated on experiences in immigrant integration policies and immigrant participation in public life of so-called “new” reception countries. The distinctive experiences of Greece, Italy, Ireland and Portugal, where integration priorities have entered the public debate only recently, were compared in order to identify lessons learnt and best practices. Dr. Dita Vogel presented some of the core findings overall of factors that may influence active civic engagement with examples from the POLITIS database. The presentation focused on the main findings of the POLITIS project and the research conclusions regarding: the characteristics of civically active immigrants; the influence of societal opportunity structures in encouraging or discouraging active civic participation; the trajectories of migrants between mainstream and ethnic activism; the role and importance of the EU dimension.

Dr. Abel Ugba, the country expert for Ireland presented the particularities of the Irish case, Dr. Joao Sardinha focused on the special features and initiatives that have been taken in order to encourage the participation of immigrants in Portugal and Dr. Anna Triandafyllidou compared the experiences and opportunity structures in Italy and Greece and the different opportunities to participation that are present in each case.

The lunch and afternoon sessions took a closer look at the state of immigrant integration in Greece, which has a large immigrant population that has self-organised and is gradually becoming active in Greek public life. The civic and political dimensions of immigrant participation in Greek public life were discussed, particularly as mainstream civil society organizations and political parties are gradually taking steps towards the immigrant communities.

The positions of the Greek Workers Confederation (GSEE) were presented by Mr. Angelos Frangopoulos, while Mrs. Evangelia Dourida presented in detail, initiatives that have been undertaken by the Church of Greece regarding integration and participation of immigrants in public life. Furthermore, the experiences of two social actors were presented during the lunchtime session. First, the concerns of a mainstream NGO, ANTIGONE on matters of social integration, education and racism were presented by Mr. Nassos Theodorides. Ms. Eda Gemi then spoke on the experience and challenges faced by an Albanian immigrant association. These presentations gave a multifaceted representation of Greek civil society and illustrated the difficulties but also the opportunities that exist in Greece that encourage immigrant participation or that render such engagement difficult.

In the afternoon session, representatives from the two largest political parties, Mrs. Katerina Papakosta- Sidiropoulou from New Democracy and Mr. Kostas Botopoulos from PASOK, presented their views on political representation and participation of third country nationals in Greece. The head of the Forum of Immigrant Organisations, (an organization representing around 40 immigrant associations in Greece), Mr. Ahmed Moawia and Mrs. Evis Qaja, who represented a network of women immigrants from northern Greece also discussed the challenges of participation, access to voting rights, societal and gender exclusion.

Through an interactive discussion between politicians, representatives of immigrant organizations and immigration experts, this conference contributed to providing a public platform for an open dialogue. It also provided an opportunity to explore and discuss the challenges faced in active immigrant participation in contemporary European societies.