We can’t go on like this: Greek debt crisis and the euro 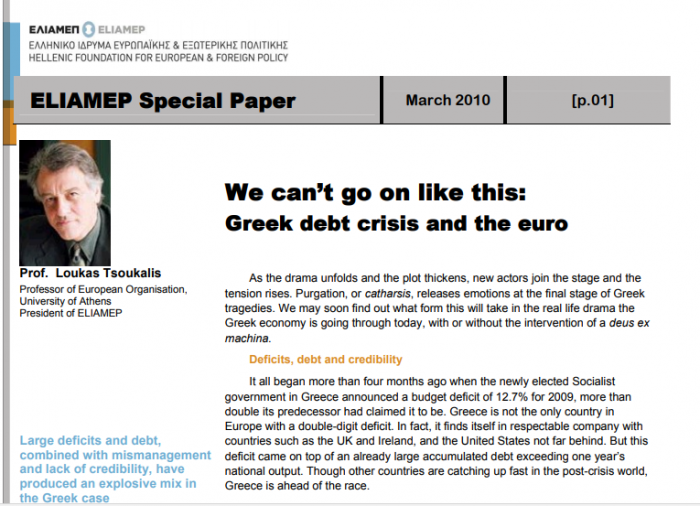 With a 12.7% deficit for 2009 Greece is not the only country in Europe with a double-digit deficit. However, large deficits and debt, combined with mismanagement and lack of credibility, have produced an explosive mix in the Greek case. In the context of an unregulated global financial system that has run amok, the destabilising factor of market speculation dealing with sovereign credit default swaps has affected other vulnerable eurozone members as well, resulting to the weakening of the euro. While prime responsibility for dealing with the Greek problem lies in Greece and measures will certainly hit hard for the next three years, a credible political leadership will be the key not only within Greece but in the context of the European Union as a whole. Denial or indecision and lack of solidarity can be dangerous for Greece and potentially also for the euro and the European system more generally. The Greek debt crisis may be a precursor of things to come as sovereign debt climbs up everywhere, itself a by-product of the crisis. Now, it is high time for the euro to acquire solid foundations. We needed them yesterday, not in 2020. While this is a difficult project and political odds are against it, the E.U. and the Euro are living proofs that we, Europeans, have done it before.