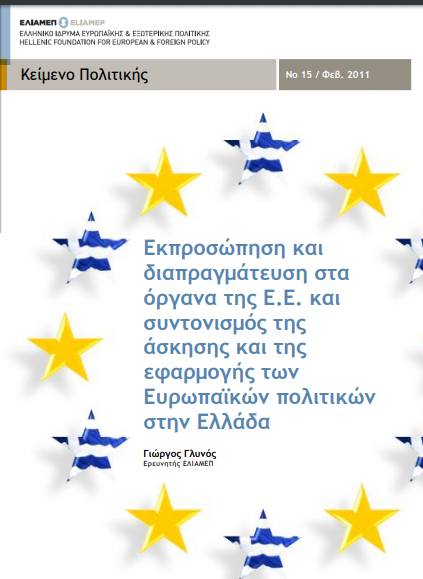 ELIAMEP’s Policy Paper No 15 authored by Giorgos Glynos argues that the continuous expansion of the Union’s competences has led to a coordination deficit. This deficit is mainly related to the implementation of policies but also affects the coordination of national representation and participation in negotiations. The implementation of the Lisbon Treaty and the operation of the European External Action Service create new demands and new opportunities for the Ministry of Foreign Affairs. In parallel, however, the coordination deficit that has already been present for years will possibly expand further.
It is suggested, therefore, that the General Secretariat of European Affairs be transferred from the Ministry of Foreign Affairs to the Prime Minister, possibly under the political responsibility of the Government’s Vice President or alternatively, a State Minister. The Ministry of Foreign Affairs will certainly maintain its own exclusive competencies on foreign policy and security issues, as well as retaining principal competencies on matters of enlargement and development, on horizontal policies and on all important negotiations.
The study of Mr. George Glynos is – among others – based, on comments and observations from executive members of the Greek and European administrations, including past General Secretaries of the Ministry of Foreign Affairs and Heads of the Permanent Representation of Greece in the EU. It is also grounded on a broader examination of public administration mechanisms in other EU countries.

Full text available in Greek only.