In focus – Strengthening healthcare during the pandemic: Great differentiation between European states 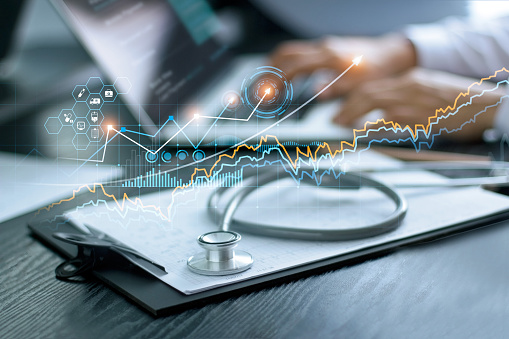 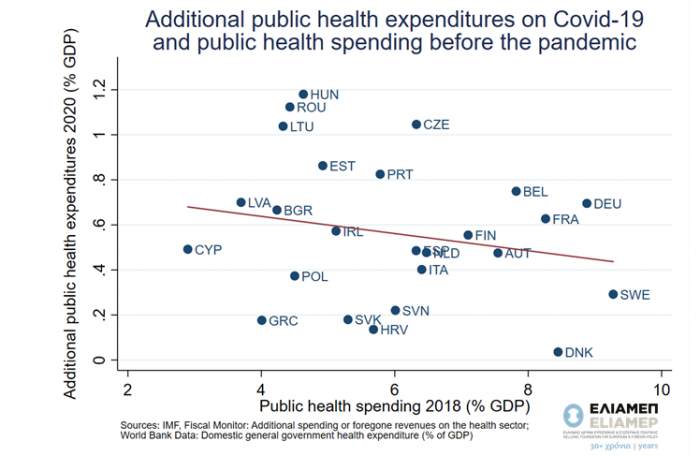 Increased healthcare needs over the past year have pushed most European countries to increase their healthcare budgets. According to the IMF’s Fiscal Monitor, the additional increase in healthcare expenditure varied widely between European countries, ranging from 0.3% of GDP (Denmark) to 1.2% of GDP (Hungary). The share of the budget allocated to healthcare is significant, considering that, according to the index, the overall increase in emergency budget expenditure for the pandemic was between 2.2% of GDP (Romania) and 8.5% (Austria). What has driven some countries to increase healthcare expenditures more than others? Have countries that have always devoted significant resources to healthcare funded their health systems more in the wake of the pandemic, or have countries with low pre-pandemic health funds rushed to fill gaps and shortages?

To answer to this question, we compare the additional healthcare expenditure incurred last year due to the pandemic (vertical axis), as obtained from the IMF’s Fiscal Monitor,* with data reflecting the share of GDP directed to healthcare (horizontal axis) drawn from the World Bank. As it can be seen from the graph, the red trend line shows a negative correlation between the two variables and the scatter chart allows us to classify European countries into three groups.

First, at the bottom right of the graph, there are countries where a large portion of their national income is dedicated to healthcare (Germany, France, Sweden, Austria, Denmark, Finland). These countries are geographically located in Northwestern Europe, and the increase in healthcare spending during the pandemic was limited -probably because they felt that the available resources were sufficient to meet the growing healthcare needs.

Second, at the top left of the chart, there are countries where a small share of GDP is traditionally devoted to healthcare, while emergency health expenditures were particularly high last year (Romania, Hungary, Lithuania, Estonia). These countries are geographically located in the Baltic and Eastern Europe areas. These countries may have felt that an increase in healthcare funds in the emergency budget for the pandemic would be necessary to meet the needs that would arise.

Thirdly, there is a group of countries that ranked in the lower to medium parts of the distribution of healthcare expenditures, which have chosen not to increase their exceptional expenditures significantly (Slovakia, Croatia, Greece, Slovenia, Cyprus, Poland). These countries are mainly located in South-Eastern Europe and it is difficult to determine the rationale behind their unwillingness to increase spending during the pandemic. Possible explanations include governments’ preference for directing emergency funds to support the rest of the crisis-hit economy and of course the possibility that in some of these countries the intensity of the pandemic was relatively weak.

It remains to be seen whether the emergency expenditures of various countries are to constitute a permanent strengthening of the healthcare systems or merely, a temporary coverage of the emergencies caused by the pandemic.

* Note: Data on additional health expenditures in 2020 have been updated until October 2020.