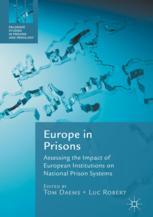 This chapter explores the domestic implementation of the European Court of Human Rights (ECtHR) judgments that are related to overcrowding and poor material conditions in European prisons. The first part describes the processes and mechanisms of domestic implementation of ECtHR’s judgments, their supervision and monitoring by the Committee of Ministers, and the extent and the ways in which they can influence domestic reform of the penitentiary system. On the basis of an initial data set of 165 judgments, which we have compiled, the second part of the chapter provides an overview of the relevant ECtHR’s judgments and the issues that they raise, the states most frequently implicated, and the nature and range of measures that national authorities institute in response to the Strasbourg Court’s judgments that find violations of the Convention. The third part describes and discusses the kind of reforms and measures that national authorities undertake by way of implementing the general measures that are called for by the relevant ECtHR judgments.