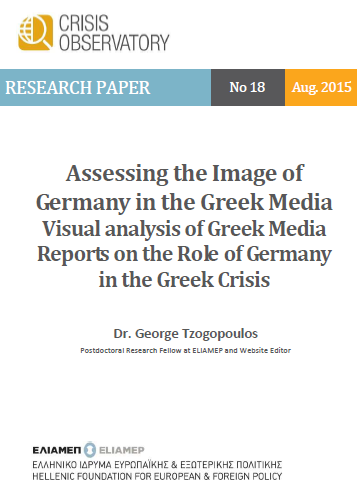 This study attempts to analyse the representation of Germany in the Greek press during the ongoing economic crisis covering the period 2010-2013. In so doing, it starts with a discussion on the main theoretical aspects explaining the relationship between media and politics in the relevant literature of political communication. It then concentrates on the issue of the European public sphere which is concerned with potential ‘European frames’ in the portrayal of Germany in the Greek media discourse. Subsequently, the study explores the Greek media landscape and employs qualitative techniques to offer insights on how Greek journalists have interpreted the policy of Berlin during the crisis. In that regard, a case study on the visit of Chancellor Merkel to Greece in October 2012 is included in the analysis. Finally, the paper presents the main findings of the media coverage as well as potential reasons for the media stance.