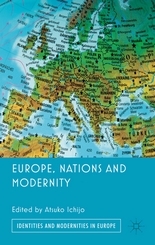 The idea of Europe, European identities and Europeanization, in short ‘Europe’, has been conventionally studied in relation to nationalism and the hegemony of nation-states in the modern world. Europe, Nations and Modernity (Edited by Atsuko Ichijo, Palgrave Macmillan, October 2011) aims to open up a fresh perspective to the study of  ‘Europe’ by placing the discussion of ‘what is Europe and what is it to be European?’ in a wider context of the study of modernity.

As a number of scholars have argued, ‘Europe’ is a fundamentally contested concept. This collection is inspired by on-going debates and proposes to study Europe by placing it in a tripartite relationship with nations and modernity using ‘Europe as modernity’ as a key. The volume presents a collection of nine case studies: Bulgaria, Croatia, Finland, France, Hungary, Germany, Greece, Turkey and the United Kingdom and provides a map of different constellations of Europe, nations and modernity in today’s Europe.

For the table of contents, please see the book flyer and also a sample chapter.

In this edited volume, Ruby Gropas and Anna Triandafyllidou explore “Greek Modernity and Europe: An Ambivalent Relationship”. In this chapter, the authors attempt to illustrate some of the tensions and paradoxes associated with the notion of modernity in the Greek case. While modernity is considered as being inherent to the core of Greek identity, it is at the same time in deep conflict and confrontation with the second core pillar of Greek identity, namely its religious particularism and strong traditions of the Eastern Orthodox Church. This tension between modernity and tradition transcends modern Greek history, its political realm and the evolution of its relationship with the rest of Europe. While considered as being at the core of European modern identity (as understood in the context of the Enlightenment and the notion of rationality and progress), at the same time, Greece has been perceived as being at the periphery of Europe requiring deep and numerous structural reforms in order to approach and consolidate modernity as it is currently perceived in western Europe – i.e. respect for human and minority rights, rule of law, democratization of the state, respect for good governance, transparency and accountability.

Gropas and Triandafyllidou argue that Greece’s own perception of its national and European identities is also based on a web of rival and even conflictual relations between tradition and modernity; between attachment to tradition and continuity on the one hand and pursuit of social contestation, rationality and secularism on the other. As such, though Greece is considered as being at the core of  and having inspired modern Europe’s values and identity, at the same time, Greece is having to undergo repeated (an in many cases costly and painful) reforms in order to become more ‘modern,’ to become more Europeanised. In response to this quest and to its own historical experience of modernization, Greece is marked by two competing modernity frameworks. What we define as the ‘Western framework’ is the one that conforms to western rational understandings of modernity and which essentially imbues all efforts and processes of Europeanisation in Greece. The ‘Eastern framework’ by contrast is one that is closer to the Greek Eastern and Orthodox tradition and which proposes a sui generis, nationally authentic path towards (non-Western?) modernity. The two tightly co-exist and alternate. It is this unresolved ambivalence that cuts within and across socio-economic strata, political parties and public discourse that make Greece a particularly challenging case to study within the multiple modernities’ perspective.