Joint monograph by ELIAMEP – CIDOB on the Greek crisis 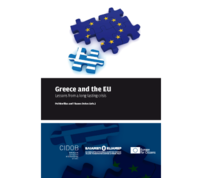 Less than a year ago, the Greek crisis reached its highest level of tension. After arduous negotiations, the Greek government and its creditors signed the agreement for a third bailout in July 2015,which should provide liquidity to the Greek public sector in return for a severe programme of deficit adjustment and structural reforms. At the time of finalising this edited volume, the spectre of Grexit seems much less likely, although not yet impossible (especially if there is Brexit). After six years of painful austerity and the adoption of a number of structural reforms, the original sins of the Greek economy, the structural governance deficits of the eurozone and the imbalances between the European economies remain almost unchanged. The crisis that dominated the European debate in the summer of 2015 changed the perception of Greece and the EU for good.

The contents of this monograph aim at providing a comprehensive view on the changing landscape of both Greek and European politics as a consequence of the eurozone crisis. It presents the results of a research workshop jointly organised by CIDOB and ELIAMEP on December 18th 2015, which departed from the following hypothesis: If the Greek crisis became the epicentre of the eurozone crisis and Europe’s economic and monetary downturn became an existential threat to the European project, then the consequences of the crisis should have transformed the behaviour of Greek authorities towards Europe and of the European authorities in facing the crisis. In other words, Greece and the EU should have adopted new visions reflecting both the transformation of the Greek political scene and the eurozone’s response to a systemic crisis.

AN OLD CRISIS, A NEW GOVERNMENT AND THE CREDITORS: “PLUS ÇA CHANGE PLUS C’EST LA MÊME CHOSE”?
Dimitris Katsikas

THE POLITICS OF SYRIZA IN EUROPE: FROM LEFT-WING RADICALISM TO POST-LEFT MANAGERIALISM
Filippa Chatzistavrou

THE GEOPOLITICAL DIMENSION OF THE GREEK CRISIS
Thanos Dokos

EMU GOVERNANCE AND THE MEMBER STATES: LESSONS FROM FEDERATIONS AND OTHER COUNTRIES
Cinzia Alcidi