Education and wage inequalities in Greece: access to higher education and its effects on income 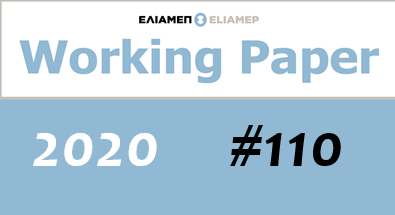 The educational system in Greece has always been at the center of public discourse, not only for the shortcomings of its design, but also for the quality of the education offered. In this context, during the last decades, the rise in wage inequalities had led the literature to investigate the existence of a possible causal relationship between the level of education and income inequality. The present paper by Pery Bazoti examines the relationship between tertiary education and economic inequality. Taking into consideration the fact that potential inequalities in access to education can hinder the redistributive role of education, the starting point of the study is the access to tertiary education. The design and flaws of the Greek education system prevent university candidates from equal opportunities since the entrance to tertiary education institutions relies heavily on the economic background of their families. The economic crisis highlighted these inequalities mainly through the decline of the disposable household income and exacerbated the already crippled abilities of the education system due to the extensive cuts that took place during this time. Nevertheless, the data reveals that private expenditure -typically related to students’ preparation for exams for entrance into university, despite its decrease, continues to have the larger share of the households’ education budget.

The literature shows that education in Greece seems to have a positive impact, over time, on income inequality by yielding higher returns for lower wages, before and even after the outburst of the economic crisis. The same results are verified as well by the empirical analysis presented in this paper for the years 2010 and 2017, chosen in order to survey potential deviations between the beginning and the end of the crisis. Specifically, the results reveal that for both years under examination returns to education are higher at the lower parts of the wage distribution, while the observed differences are discussed in the framework of the skills mismatch phenomenon.

· The design of the Greek education system has inherent flaws that contribute decisively to the manifestation of inequalities in access to education.

· The public funding of education is traditionally low. During the period of the economic crisis things became worse, as significant cuts impacted negatively the effectiveness of the education system.

· During this time, despite its decrease, the private expenditure, related to preparation expenses for access to tertiary education, continued to absorb the lion’s share of the total household education budget.

· Traditionally, education in Greece seems to play a redistributive role since it yields higher returns in the lower parts of the wage distribution.

· An empirical analysis for the years 2010 and 2017 verifies the redistributive role of education during the crisis, while the observed differences are discussed with reference to the skills mismatch phenomenon.