Moving EuropE Together (MEET): from Local Citizens’ Agoras to the Conference on the Future of Europe

ELIAMEP participates as a partner in the project “Moving EuropE Together (MEET): from Local Citizens’ Agoras to the Conference on the Future of Europe,” an ambitious project set up by a network of civil society organisations (CSOs) across eight member states under the coordination of the European Policy Centre (EPC). Its aim is to meaningfully involve European citizens in the debate on the future of Europe by reinforcing bottom-up synergies and Europe-wide collaboration.

The MEET project will be running alongside the Conference on the Future of Europe (CoFoE), enabling citizens to present their ideas about the future direction of the EU from a national, regional, and local perspective while promoting a direct and interactive democratic engagement between EU policymakers and European citizens. In this regard, online and offline Local Citizens’ Agoras (LCAs) will be organised, bringing together EU policymakers (including MEPs) with the participants to debate core policy themes drawn from the agenda of the Conference on the Future of Europe. These LCAs will supplement and reinforce the participatory elements in the CoFoE and connect back to the discussions happening at the national and EU level and the Conference process itself.

Within this framework, ELIAMEP will organize two Local Citizens’ Agoras as well as a final public event to present and discuss the relevant findings of the LCAs with a broader audience.

The core outcomes and findings of the LCAs and the public events in the participating member states will be summarised in national reports, the key findings of which will feed into a Final Content Report. This Report will be presented and discussed at a final public conference in Brussels. 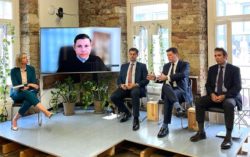 Local Citizens’ Agora in the context of the MEET project