Nick Danforth is a Senior Visiting Fellow for the German Marshall Fund focusing on U.S.-Turkish relations. Previously, he worked as a senior policy analyst for the Bipartisan Policy Center’s national security program. Danforth received his M.A. from the School of Oriental and African Studies and his B.A. from Yale. He completed his Ph.D. in history at Georgetown University in 2015 and has written widely about Turkey, U.S. foreign policy, and the Middle East for publications including The Atlantic, Foreign Affairs, Foreign Policy, New York Times and Washington Post.

“The Outlook for Turkish Democracy: 2023 and Beyond.” The Washington Institute. Policy Analysis. March 2020. 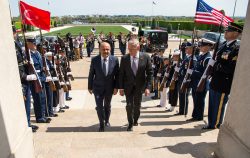 It Is time to let Turkey Go - by N. Danforth