15th European Seminar of ELIAMEP: Two days full of realistic suggestions about the Future of the EU! 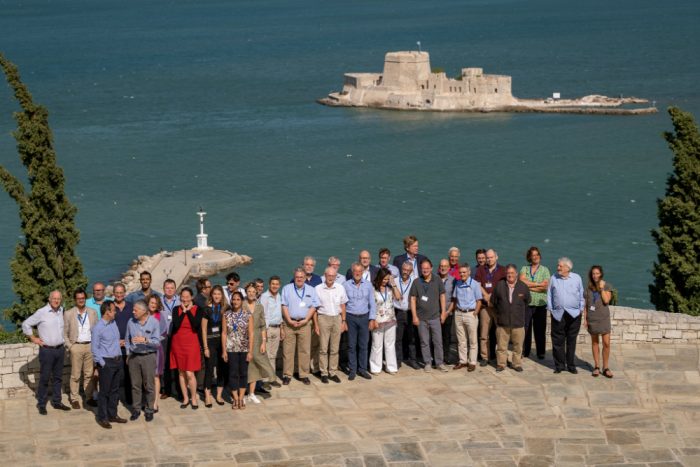 The opportunities and challenges that the European Union is facing, such as the global rise of populism and nationalism, the future of the Euro, as well as the economic and social inequalities were few of the interesting topics that triggered a debate during the 15th European Seminar of ELIAMEP, which took place from the 12th to the 14th of September in Nafplio, where several of distinguished academics and policy makers participated.

«Those are odd times for our world, the West, the nation states and the European Union. Established principles and institutions, interior and international relations of power change rapidly inside a frame of revolutionary technological and climate changes. Although the levels of global prosperity are constantly increasing and there are few conflicts besides in the Middle East, the feeling of insecurity still exists» says Herman Van Rompuy, ex-President of the European Council who was the main speaker during the Seminar.

During the opening of this closed two-day meeting in Nafplio, Mr. Rompuy referred to a number of subjects which concern and are expected to define the course of the European Union in the following years such as the rise of populism and nationalism. «We are experiencing some sort of globalization of populism». He also added: «Reality is the biggest threat for populists and idealists».

Referring to the subject of Brexit, he defined it as «an example of new populism and nationalism which slowly turns into masochism». As for the hesitation for «more Europe» he claimed that the causes are related to the fact that national democratic legalization is stronger than European legalization.

During his speech, Mr. Rompuy also tried to answer if a new round of financial austerity can be re-introduced, especially in countries of the European South knowing full well that in several countries, the deficit will surpass 3%. He indeed pointed out that, although it would be difficult for the member states to reach an agreement for changes concerning the Pact, careful steps should be made since populism is ready to drain political advantages from this «blind austerity».

The president of ELIAMEP, Professor Loukas Tsoukalis pointed out, inter alia, the necessity to focus on «European sovereignty» while he also claimed that it is time to reconsider the European approach in economy by taking in consideration the problems of redistribution and the creation of both winners and losers from globalization.

There was a special interest in the ideas of speakers who attended the panel with the subject: «Should we choose between Trump, Putin and Xi?» (Charles Kupchan, Josef Joffe, Kristi Raik, Nathalie Tocci, Zaki Laidi). While coordinating the debate, Dr. Thanos Dokos, Director-General of ELIAMEP, pointed out that this question has two aspects since it is about if those leaders could last, as well as if Europe can survive between other strong players of the global system.

During the first day, two more topics produced useful conclusions for the future. The first one was titled: «Political disintegration, populism and nationalism» with journalist Christine Ockrent as coordinator and Sergio Fabbrini, Monika Sie Dhian Ho, Jacques Rupnik and Tony Barber as speakers. The second one was titled: «From the Communal Method to a union of states» with Nikiforos Diamantouros, former European Ombudsman, as coordinator and Josef Janning, Ignacio Torreblanca and Selma Bendjaballah as speakers.

The second day began with a conversation dedicated to the subject «Are we stuck in a slow growth and in a wide increase of inequalities? » which was directed by Fabian Zuleeg, Chief Executive of the European Policy Centre (ECP), while Andre Sapir, Michael o’ Sullivan, Shahin Vallee as well as the former Minister of Economics, Giorgos Papakonstantinou also participated.

There was also a fertile discussion which emerged from the subject: «Is euro strong enough to survive another upcoming crisis? »which was coordinated by the Vice President of ELIAMEP, Professor Giorgos Pagoulatos and had interventions from Jose Leandro, Ansgar Belke and Lorenzo Codogno.

As Mr. Pagoulatos mentioned: «Euro’s main priorities for achieving a reform are the anti-procyclicality, the breakage of the vicious circle of doom loop as well as the completion of the banking union and the enactment of a true fiscal ability.

The Seminar concluded with two more interesting topics. The first one, which had Dr. Roumpi Gropas, Anna Diamantopoulou and Christos Stylianides as speakers, and Manuel Muniz, from IE and Harvard University, as coordinator was about «The new European agenda». During the second one –which was coordinated by Paul Taylor, author in Politico- Christian Lequesne, Daniela Schwarzer, Agata Gostynska-Jakubowska and Giannis Emanouilidis had the chance to tackle some interesting topics about the future prospects of the European Union.