Ioannis Armakolas on One News Weekend (One Channel) 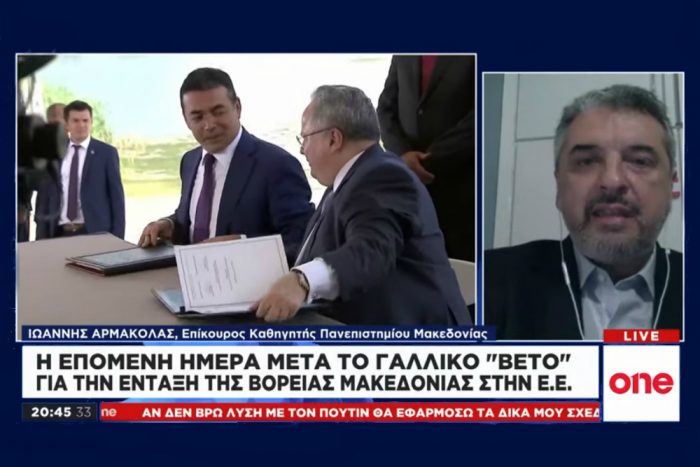 The importance of the ‘brake’ put on by the European Union to the launch of the accession negotiations for Northern Macedonia and the developments that were triggered by it in the neighboring country, explains Dr. Ioannis Armakolas, Assistant Professor at the Department of Balkan, Slavic and Oriental Studies, University of Macedonia and Head of the South-East Europe Programme – ELIAMEP. “I am concerned not only about North Macedonia but for all of the Western Balkan countries and also the Balkans as a whole, including Greece,” the professor commented, referring to the EU’s stance and France’s stance in particular.

“It was a historic mistake by the EU. I am afraid that we will live to regret and see its negative consequences. It is not just about the credibility of the EU, which is collapsing in the region. France indirectly questions the EU’s enlargement strategy in the Western Balkans. It is a hypocritical and dangerous attitude on behalf of France because it can lead to the destabilization of the wider region. This may not be of interest to Paris or other Western capitals but it is of great interest to Greece, Bulgaria, and all the neighboring countries which have a direct interest in the stabilization of the region and the gradual EU integration”, Dr. Armakolas added.

On the internal developments and the outcome of the national elections in North Macedonia, Dr. Armakolas notes that “the polls show a tie between the Social Democratic Party and the nationalist opposition party. However, it remains to be seen what will happen in the next two to three months until the elections. It will be very close elections”.

Regarding the viability of the Prespa Agreement in the event of a VMRO victory he stresses that “the former opposition cannot denounce the Prespa Agreement if it comes to power, but it can sabotage its implementation. This is something that can happen. It may implement some of the provisions of the agreement, but it will set aside others. Prime Minister Zaev has begun radical changes in the country in relation to the implementation of the Prespa Agreement. These changes, according to the Agreement, will have to be implemented when North Macedonia will start the accession negotiations. Once the negotiations are up in the air, the implementation process is in doubt, since many of the provisions of the Agreement are linked to the opening and closing of the accession chapters”.

You can watch the interview here.