“Greece has an institutional problem with counterproductive elites” 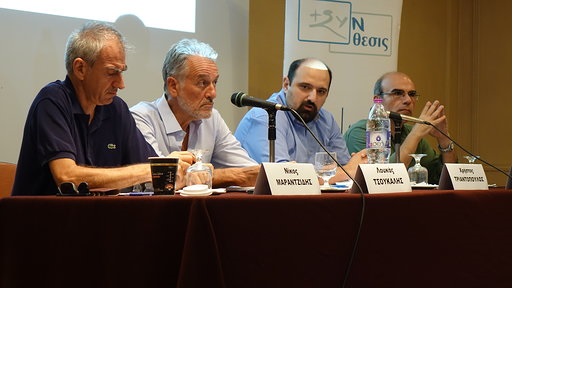 “A blocked country is a country with a suffocating and unstable framework of rules, weak institutions and a problematic rule of law, organized interests and great inequalities, limited perception of the common good, and education that emphasizes on learning by heart rather than critical thinking”, said Prof. Loukas Tsoukalis, Professor at the University of Athens, during the event “Is Greece a blocked country?“. Greece remains a country with institutional problems and with counterproductive elites, and that’s why it remains a blocked country – this is the conclusion of the event co-organized by the Hellenic Foundation for European and Foreign Policy (ELIAMEP) and the Sinthesis Dialoque Society, at the conference centre “Forum” in Volos.

Mr. Nikos Marantzidis, Professor at the University of Macedonia, stressed that Greece is no longer a blocked country, but has blocked political elites – they are counterproductive and this is due to the deepening of the European Union and to the globalization. Mr. Aristides Hatzis, Professor at the National and Kapodistrian University of Athens, stressed among others that the crisis was not fiscal, but institutional. Greece has not yet open markets, neither open economy and it has distorted institutions, according to Mr. Hatzis. Mr. Christos Triantopoulos noted that “today, Greece, by completing the eight-year period of the memorandums, seems to have failed to respond widely and convincingly to a number of critical issues so as to bring national change“. Issues which, among others, relate to the factors that pushed the country in this difficult position and the factors that hinder reforms, sustainable growth and prosperity for all its citizens, Mr. Triantopoulos said.