The pandemic and Turkey – By I. N. Grigoriadis 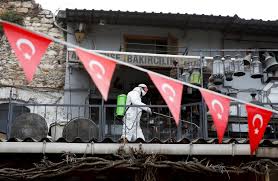 In his article for the newspaper TA NEA, Ioannis Ν. Grigoriadis analyzes the Turkish government’s reaction to the outbreak of the pandemic and the efforts made by Recep Tayyip Erdogan to show that his country remains strong, to such an extent that it has the ability to provide humanitarian aid to Europe and the United States. This “acts in accordance with the narrative of a powerful Turkey, that has both the means and the will to assist current and fallen hegemons like the United States and the United Kingdom, as well as countries in the Balkans and sub-Saharan Africa,” according to Grigoriadis. In contrast, Turkey finds it self in a dire financial situation, with unemployment soaring and a devalued Central Bank. This has tragic consequences, as does the government’s refusal to cooperate with metropolitan municipalities that are controlled by its political opposition.