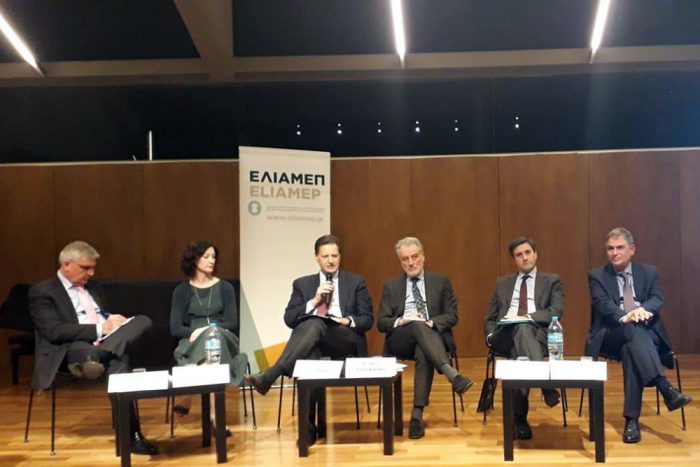 The fiscal woes of Greece before the crisis, the changes in the institutional framework during the Economic Adjustment Programmes and the extent to which budgetary reforms were successful, were the themes discussed at the Public Discussion held by the Hellenic Foundation for European and Foreign Policy (ELIAMEP) on December 11th 2019. The event marked the publication of a study entitled: “Structural Changes in Fiscal Policy under the Crisis: Institutional Framework and Economic Outcomes”, conducted with the support of the A.G. Leventis Foundation.

The main findings of the research were presented at the public discussion by the authors of the study, Marianthi Anastasatou, economist, Bank of Greece and Panos Tsakloglou, Professor at the Athens University of Economics and Business. The participants in the discussion that followed were the deputy Minister of Government Expenditure, Theodoros Skilakakis, the former Alternate Minister of Finance, George Chouliarakis and the former Minister of Finance, Filippos Sachinides, while the discussion was coordinated by Loukas Tsoukalis, President of ELIAMEP and Professor at Sciences Po, Paris.

The study investigates the fiscal reforms in the areas of Public Finances Management, meaning the management of the creation, approval and execution of the government budget as well as the reforms in the pension system and the healthcare system, since these two areas proved not only to be the primary source of fiscal destabilization for Greece due to their large deficits, but also stand for almost 75% of the public expenses.

Specifically, the study observes that “the non-compliance of the fiscal targets was something common for the pre-crisis Greece”, when the debt to GDP ratio was steadily above the limit of 60% that the Stability and Growth Pact (SGP) allows for. Namely, the problematic budgeting process, the weak state income due to tax evasion and the distorted tax policy as well as the extent and effectiveness of government expenditures were discussed as the main causes of the country’s fiscal derailment.

“In the Greek public discourse, it is widely believed that the fiscal derailment of Greece before the recent crisis, was due to the lack of political will. However, this explains only part of the problem. In this study we showed that important problems existed in the state mechanism while the appropriate tools and processes were not available to the fiscal policy makers. Dealing with these problems demanded a series of structural reforms” mentioned Ms. Anastasatou during the presentation of the study.

On the evaluation of the institutional changes under the Memoranda, the study examines the reforms relevant to the state budget as well as those relevant to government expenses. It is remarkable that there are still significant margins for improvement regarding the processes of creation, monitoring and executing the budget which “despite the reforms realized under the crisis, still puts more emphasis on the inflows rather on the outflows, meaning the produced outcome” said Mr. Tsakloglou on the budgeting reforms.

At the same time and focusing on the expenditures, the authors analysed the reforms adopted for the rationalization and limitation of the expenses and the income increase, in the field of human resources, the pension system and the healthcare system.

Nevertheless, as it is observed, despite the reforms in the pension scheme “in the medium term the sustainability problem of the system remains present posing thus issues of intergenerational inequality, while the fiscal gap is still larger than the Eurozone average”. The pensions expenditures in Greece, referred to as a “fiscal bomb” by Ms. Anastasatou, are the highest in the EU while the deficits of the pension system burden the government budget.

Equally interesting are the findings concerning the healthcare expenses, a sector where the reforms, as highlighted by Mr. Tsakloglou, were orientated towards a National Healthcare System, with uniform rules. However, “the system remains ‘hospital-centered’ with low expenses on preventive medicine, outpatient care and long term care”.

Commenting on the findings of the study, the deputy Minister of Government Expenditure, Theodoros Skilakakis, noted: “The adjustment that took place created a new deficit, a deficit in investment. We shrank the economy’s productive capacity. And it was shrunk in terms of capital and labor. This is the problem today. It is not the fiscal deficit, it is the investment deficit”. In regard to the issue of tax evasion, he added: “Unfortunately, despite the announcements of the previous government, tax evasion was not decreased during the precious years. On the contrary, those who file taxes today are even less than those who collect revenues”.

Former Alternate Minister of Finance, George Chouliarakis, argued on his side: “The country’s fiscal problem is still here. And in the next recession, which we all know that it will come eventually, a country with such high levels of public debt, will again find itself in the same state as in 2009”. In order to tackle this risk, he suggested the creation of a Stability Fund while he also warned that the 2020 budget submitted by the Government, is probably too optimistic, posing several perils.

Former Minister of Finance, Filippos Sachinides, expressed the view that the problem was not only fiscal but institutional as well, charging the 2004-2009 Government with the fiscal derailment of the country. He also explained how the bad quality of data, the absence of a warning mechanism as well as the lack of evaluation and adequate information were among the inefficiencies he had to manage as a Minster. Still, he expressed his concerns on whether the structural measures adopted will be actually implemented or their application will be cancelled in action, by those who are politically responsible.

You can access the full study in Greek here.

You can watch the video of the event here.