PAVE Policy Roundtable in North Macedonia – How to strengthen community resilience against radicalization? 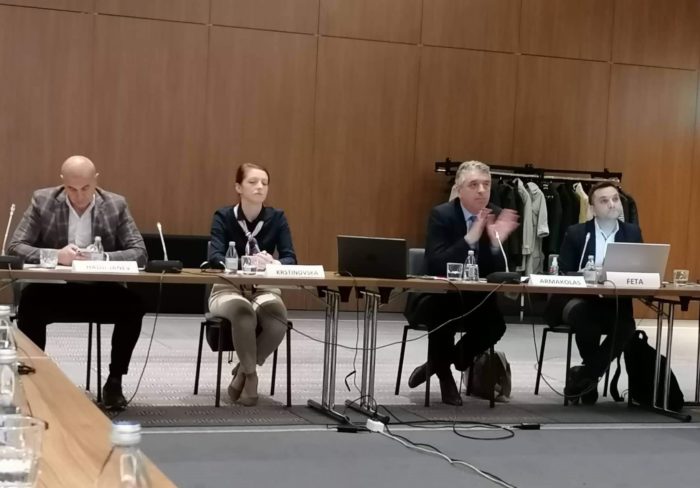 On November 10th, 2022, the South-East Europe Programme of ELIAMEP in cooperation with the Skopje-based think tank Estima, and in the context of the EU funded project PAVE organized a policy roundtable in North Macedonia on the question of “how to strengthen the resilience of communities against radicalization and violent extremism”.

The Policy Roundtable took place in Skopje and managed to gather representatives from various types of institutions (central and local), international organizations based in the country, religious institutions, academia, civil society, and P/CVE practitioners. During the roundtable, key findings from the research reports and policy recommendations from the policy brief formulated by the PAVE team of ELIAMEP were presented, based on the results of the fieldwork research the team conducted in the municipalities of Tetovo and Kumanovo in July 2021.

The aim of this policy roundtable was to strengthen the capacity of policy makers, community leaders and P/CVE practitioners for the development of an effective prevention strategy between the European Union and its neighborhood. This event created the room for productive conversations with all actors giving them the opportunity to identify ways in which communities can support themselves and ways in which those outside the community, including international organizations, can support country’s efforts on countering and preventing the different forms of radicalization.

The Policy Roundtable in North Macedonia was organized into three parts:

-In the first panel, the research team of ELIAMEP made a short presentation of the PAVE project, its main objectives, the regions involved, and the general scope of the work done. They proceeded with an extensive presentation of the key findings from the fieldwork and the discourse analysis of the online content, including the most significant factors of community resilience and vulnerability to violent extremism, the online and offline narratives used by extremist groups, and the role that religious leader, the civil society, the local institutions, and the international community play in hindering or increasing community resilience. At the end of their presentation, they presented concrete policy recommendations to the state institutions, civil society, and international community.

– In the second panel of the event, the floor was given to the local stakeholders in order to comment on the findings from their perspective. The country’s National Coordinator for Countering Violent Extremism and Counter Terrorism, Mr. Zlatko Apostoloski, expressed his satisfaction with the research as, according to him, the findings of such work are useful in the work of the National Committee on CVE/CT (NCCVE/CT) and the government in general. He presented the work done by the NCCVECT on the aspects identified as key challenges in the research, namely the situation and the activities in prisons, the relations with the religious authorities, the work done with the returnees and their families and the education area. He informed about the progress done in these areas, but according to him there are still great challenges ahead, especially on local level and on the online space. The Executive Director of Nexus Civil Concept. Ms. Afrodita Musliu, focused on the activities implemented by her organization in consortium with other NGOs particularly the field work in the local communities. She mentioned the excellent relations with the government which have improved in recent years and noted the fact that civil society had been involved in policy making and specifically in preparing national strategic documents and action plans. She also commented the research findings and recommendations to address the segregated education by saying that it is something that is very difficult, even impossible to implement. Dr. Lidija Georgieva, a Professor at the Cyril and Methodius University of Skopje, emphasized the quality of the methodological approach and the relevance of the PAVE research. She mainly touched the emphasis that PAVE project gives to the communities as an added value for the academic world. She also provided specific feedback on recommendations which have remained relevant over a longer period of time and focused on the role of the religious communities in enhancing resilience of communities towards any kind of radicalization.

– In the third part of the Policy Roundtable, the floor was given to the participants in order to comment on the findings and recommendations from their perspective. During the discussion, Mr. Safet Neziri from the Ministry of Education reflected on different aspects related to the current state of play in the area of education, youth and the society at large. He particularly focused on the role of the religious communities, that more attention should be paid to the approach of different streams of Islamic ideology, how the mosques that preach these ideologies interact with pupils and that sometimes the parents and in general the parents are not aware of the participation of their children in the religious practices of these religious communities. Mr. Gjakush Kabashi from the Council of Europe focused on the need for evaluation of what has been achieved and what remains to be done, as a number of recommendations seem to be repeating over the past several years. Ms. Meral Musliu from the CSO Pleiades wanted to hear more regarding the gender aspect and whether the European tendencies in this area can be observed in North Macedonia as well. Mr. Hadji-Janev pointed to the problem of online radicalization and that more focus should be put on the dark web and the alternative ways that are used online to lure young children, in particular through gaming platforms and chatrooms. At the end Mr. Feta responded to the comments and questions from the audience.

The Working Paper for North Macedonia can be accessed here.

All PAVE publications can be accessed here.