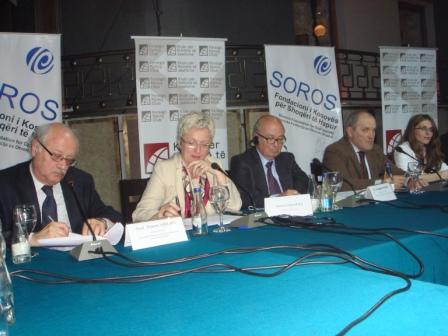 The Hellenic Foundation for European and Foreign Policy (ELIAMEP) is continuing its monitoring and analysis of developments in Kosovo since 1995. Responding to an invitation by the Foreign Policy Club (think tank) in Pristina, a delegation visited Kosovo from 22nd to 25th of April 2010.

During their visit to Kosovo, they had meetings with representatives from politics, civil society and the media. Among them the President, Prime Minister and Foreign Affairs Minister of the “Republic of Kosovo”, Mr. Fatmir Sejdiu, Mr. Hashim Thaci  and Mr. Skender Hysani, and the Leader of the opposition Mr. Ramush Haradinaj. In addition, the delegation held meetings with leaders of the Bosniak, Turk and Roma communities. They also met with Father Savva at the historical Decani Monastery to discuss the protection of the Serbian Orthodox Monastic Community in Kosovo. The protection of historical monasteries is based on a proposal that ELIAMEP had advanced in 2005. Finally, they participated in a conference on “Kosovo and the EU: Views from Athens”. Due to the extraordinary participation of the Greek delegation in a TV discussion in Ohrid it was not possible for them to meet with representatives of the Serb community as well.

In the fall of 2010, a delegation from Kosovo will visit Athens.

(f) On-camera interview with Hashim Thaci, Prime Minister of  the ” Republic of  Kosovo”

Thanos Veremis
Vice-President of the Board of Directors; Professor Emeritus, University of Athens; History, International Relations