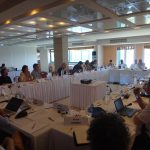 “Global Europe in a Changing World – How to Avoid Irrelevance”. This is the 9th consecutive European Seminar organized by ELIAMEP. It is funded by the Jean Monnet Action Programme of the European Commission, and every year it brings together leading thinkers and policy makers from all over Europe and beyond to discuss broad themes of current interest.

Crises, revolutions, markets and technology are transforming the international scene fast. New actors are emerging, power relations are shifting, expectations are being redrawn, and the nature of politics and foreign policy making is changing. In this rapidly changing context, how can Europe continue to participate meaningfully in influencing global and regional developments? Is the EU able and willing to generate a ‘grand strategy’ and what sort of obstacles does the current crisis pose for European integration? Is it able to match its means to the ends it aspires to and what sort of policy options, institutions, politics and politicians are needed to implement these?

This year’s seminar was kicked off with a discussion of the tectonic shifts in the global system. Analysts and diplomats from Brazil, China,India and Russia along with European experts gave their views on the ways in which the world and Europe are changing. We then examined the effects of the economic crisis on the global role of the EU. The debate concentrated on the following questions: How well has the EU mastered the crisis and where do we stand now? What is the EU’s role in a new system of global economic governance? And what is the collateral damage that this crisis has inflicted on the EU’s global role?

Europe’s neighbourhood has changed deeply and dramatically over the past year and a half. The third session therefore concentrated on changes in North Africa and developments in the Middle East and critically discussed the EU’s responses to the Arab Spring, missed or potential opportunities for the EU in the region as new actors rise and new security dilemmas are posed for the Union and its Member States.

Political developments within the EU were also at the core of this year’s European Seminar. The political and economic implications of the Greek and French election results were critically assessed in terms of what they mean for the future of the Eurozone, how they affect the core principles upon which the European project is based, and the Union’s enlargement.

The question of Europe’s borders and the prospects for further enlargement were subsequently debated further by the Seminar participants against the background of a prolonged period of enlargement and reform fatigue and of the deepest existential crisis the Union has faced in recent decades. External relations and foreign policy were finally examined on two fronts. First, there was an attempt to draw a provisional balance sheet for the European External Action Service and to assess the extent to which the current institutional framework has or has not been effective in pursuing a common foreign policy. Second, the issue of whether a revised European Security Strategy was necessary triggered a wider discussion on the direction that CSDP should take, what sort of relationship was desirable with NATO, and how the Transatlantic partnership could be reinvigorated.

The concluding round table tried to bring the various issues that were discussed throughout the Seminar in an effort to respond to a simple yet pressing question: How can the EU stay ‘in sync’ with global changes? What is the relevance of the European model in a world where soft power has many limitations and in which the relative weight of Europe keeps shrinking? Can unity provide the counterbalance, and is it likely to materialize?

You can see the programme of the conference and the list of participants.