Discussion with Mr. John Griffin, Ambassador of the Australian Embassy in Athens, 31/05/2016

Date
May 31, 2016
Location
Representation of the European Commission in Greece 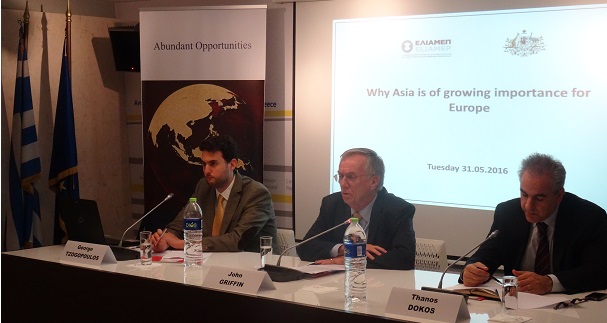 On 31 May 2016 the Hellenic Foundation for European and Foreign Policy (ELIAMEP)  in collaboration with the Embassy of Australia in Greece organised a discussion with Mr John Griffin, Ambassador of the Australian Embassy in Athens. Ambassador Griffin spoke on ‘Why Asia is of growing importance for Europe’. The event took place at  the Representation of European Commission in Greece. Director General of ELIAMEP Dr Thanos Dokos was the moderator and Dr George Tzogopoulos made comments. The speech of Ambassador Griffin and the discussion which followed were synthesised around the strategic, economic and cultural aspects which can bring Asia and Europe closer. Emphasis was put on the current challenges and the importance of international cooperation to better deal with them.