Roundtable discussion: ‘Civil Society in Greece in the wake of the economic crisis’ 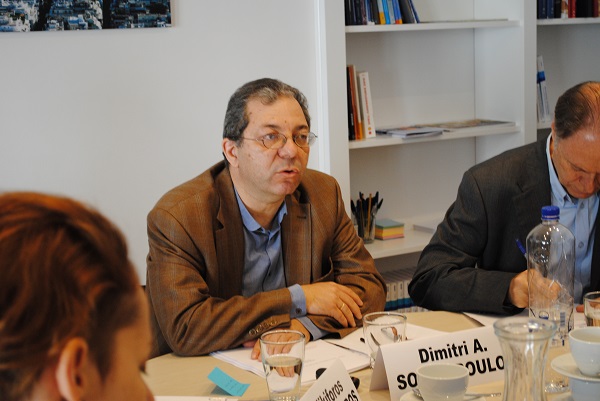 The event, which was organised by the think-tank Konrad-Adenauer-Stiftung (KAS) and the Hellenic Foundation for European and Foreign Policy (ELIAMEP), was carried out with great success, given the high participation of relevant experts and scholars as well as the constructive discussion that accompanied the speaker’s presentation. Key speaker was Associate Professor Dimitri A. Sotiropoulos (University of Athens), Senior Research fellow at ELIAMEP. The event was moderated by Professor Nikiforos Diamandouros, former European Ombudsman, who also commented on the paper by Dimitri Sotiropoulos. A second invited commentator was Ms. Ioanna Pertsinidou, project manager of the Athens-based NGO “PRAKSIS”.

At the beginning of the event, Susanna Vogt, Head of the Greece Office of KAS, welcomed the participants and explained the purpose of the seminar.  Nikiforos Diamandouros made a general introduction to the topic of civil society. In his presentation, Dimitri A. Sotiropoulos provided a distinction of various forms of civic society, contrasting civil vs. uncivil society and formal vs. informal civil society. Then the speaker emphasized post-1974 Greece’s historical and institutional legacies as major causes of current trends in civil society. Political party polarization of state and social institutions along with the weak tradition of voluntarism contributed to the poor development of civil society Greece. However, within weak civil society there were strong enclaves, such as representative associations of business associations and liberal professions, trade unions in state-owned enterprises and student associations participating in the management of universities which constitutes the Greek sui generis civil society case.

In the second part of his presentation, Dimitri A. Sotiropoulos focused on the effects of the economic crisis and ensuing policies in order to analyse the development of social cleavages. After the crisis erupted in May 2010, the salaried strata most hit by austerity measures organized protests to defend their living standards and social rights, but other, narrow occupational interests fought to protect their market niches (trade unions of public employees, truck and taxi owners, lawyers, and others) or their preferential salary regimes (judges, employees of the parliament). Other crisis-triggered movements ”from below” were the ‘Won’t pay’ movement, the “Indignant people” movement as well as violent local movements against  governmental decisions.

Gradually social movements became highly politicized and driven by parties, as peak moments of the anti-austerity mobilizations coincided with the increasing presence of opposition parties and the decline of civil society protests. After June 2012, party-dominated protests became the norm. Then the speaker focused on social solidarity movements and how formal organizations (NGOs, Foundations) and informal networks mobilized to offer social services and basic goods to vulnerable groups. Such networks included exchange networks, social clinics, social pharmacies, time banks and community based organizations among others.

In the final part of his presentation, Dimitri. A. Sotiropoulos explained the reasons behind the growing number of protest movements and informal social solidarity groups. According to his view, there are five reasons for this crucial development: the long duration of adverse social effects of the economic crisis; the long, post-1974 legacy of social protest along with the legacy of the December 2008 riots; party politicization of labour and student unions as well as the influence on of civil society by parties; a polarized political life with the lack of a policy consensus culture; and lastly, the strong decline of trust in political institutions which was already evident before the onset of the crisis. The speaker concluded that civil society was revitalized in the context of the crisis, but expressed doubts about whether the relation between political parties and civil society has really changed.

The analysis kicked off a vivid roundtable discussion among the participants. Nikiforos Diamandouros underlined the need for a more precise answer to what can be defined with the term “civil society” and which entities should be included in the term. He stressed the need to make a sharp division between “civil” and “uncivil” society, questioning the nature of violent social protests.

Ms. Ioanna Pertsinidou contributed a more practical approach to the organized part of civil society expressing the NGOs’ view. She supported the need for more accountability mechanisms and she also expressed her view regarding the scandals that have been brought into the surface during the previous years, arguing that in many cases NGOs are being used as a scapegoats for negative developments in the public funding sector.

LSE Emeritus Professor Nikos Mouzelis also contributed to the theoretical discussion. He explained that civil society should be considered as a third space between the state and the market and that profit driven associations and organizations should be excluded from the definition of civil society.

Professor Calliope Spanou, the Greek Ombudsman, referred to the difficulties to assess the sustainability of current civil society formation due to the transitional period, i.e., the crisis that Greece undergoes.

The moderator, Nikiforos Diamandouros, concluded in underlining that due to the crisis there is a new open political space which depicts a great opportunity for the Greek civil society to grow.

Working Paper: ‘Civil Society in Greece in the wake of the economic crisis‘