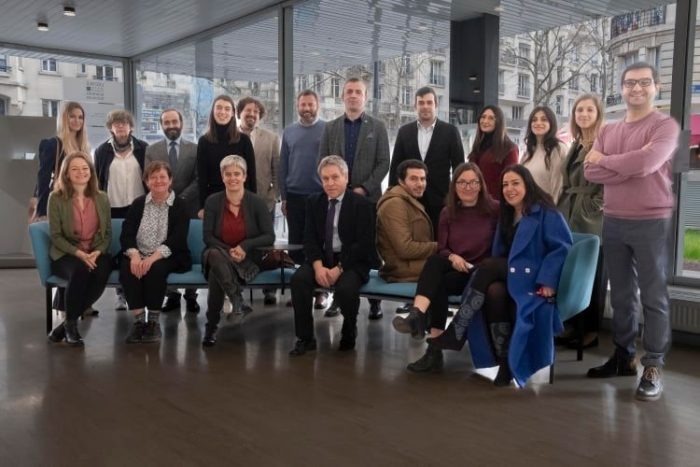 The PAVE project partners gathered in Paris in February 22 for the 2nd Progress and General Assembly Meeting. The aim of this meeting was for the partners to present the progress of the work that has been made during last year.

The Hellenic Foundation for European & Foreign Policy (ELIAMEP) research team was represented by Bledar Feta, who attended the meeting in person and by Ioannis Armakolas and Triandafyllos Karatrantos who participated online. More concretely, Bledar Feta presented the work of ELIAMEP’s team in the context of Work Package 5. He made specific references to the fieldwork the team conducted in North Macedonia, namely in Tetovo and Kumanovo, in order to collect empirical data on online and offline (de) radicalization as a driver of community vulnerability and resilience. He also outlined some of the key findings from the analysis of the fieldwork data and presented the outcome of the 2nd Stakeholder Meeting organized on February 17, 2022. Through this meeting, the team managed to bring together state-based and civil society stakeholders, along with representatives of religious institutions and members of the international community from North Macedonia in order to discuss the findings and exchange views and inputs. The Work Package 6 where ELIAMEP is a leader was covered by Akis Karatrantos. More specifically, he presented the work done as far as concerned the selection and the analysis of data on transnational dynamics of extremism in the WB and MENA and its interconnections with Europe. He also presented the work plan for the next six months which among others foresees the development of a toolkit that will includes cross-regional vulnerability/resilience factors. The Head of PAVE’s Research Team, Ioannis Aramakolas, intervened during all sessions elaborating on the progress achieved so far and further analyzing the findings of the fieldwork.

After three days of extensive work and many discussions, the meeting was successfully concluded on Thursday, February 24. This meeting marked the first time, the 2020 Horizon sister projects, notably PAVE project, PREVEX project, and Connekt project were able to meet to exchange research findings on violent extremism. Drivers and features of VE, country findings and regional trends were some of issues included in the discussion agenda during the second day of the meeting. In the context of Paris meeting, a validation workshop with Peacemakers Network was also organized, offering recommendations on capacity needs and proposed solutions for preventing violent extremism (PVE). The research team of ELIAMEP contributed to the discussion by providing insights that will support the development of capacity-building tools and trainings based on the findings from the empirical research that the team conducted in North Macedonia in July 2021.