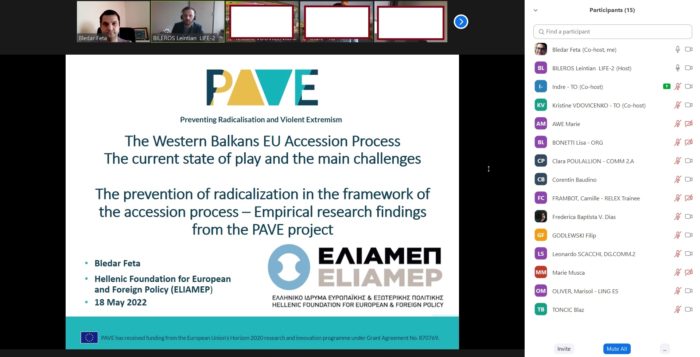 Within the context of the “Talk to the Trainees” sessions organized by the Council of the European Union, Bledar Feta delivered a presentation on Western Balkans’ EU integration perspectives. He also talked extensively about the prevention of radicalization within the framework of the accession process of the WB countries.

During the first part of the presentation, Feta analyzed the current state of the accession process for the countries in the region emphasizing on the recent developments, the relevant implications, the existing problems, and the future challenges. His presentation debated the new dynamics from both the EU and the Western Balkans and the possible role of third players such as China and Russia in the region.

In the second part, Feta talked about the challenge of the violent extremism and radicalization in the region that requires common approach within the framework of the accession process as well as the implementation of the Joint Action Plan on Counterterrorism for the Western Balkans.

To this end, he presented the findings from the empirical research conducted in many Western Balkan countries in the context of the Horizon 2020 PAVE Project.

More concretely, Feta presented the factors or gaps that build and hinder community resilience against violent extremism in North Macedonia, based on the findings from the fieldwork the PAVE research team of ELIAMEP conducted in Tetovo and Kumanovo, in July 2021.

The discussion closed with a Q&A session.