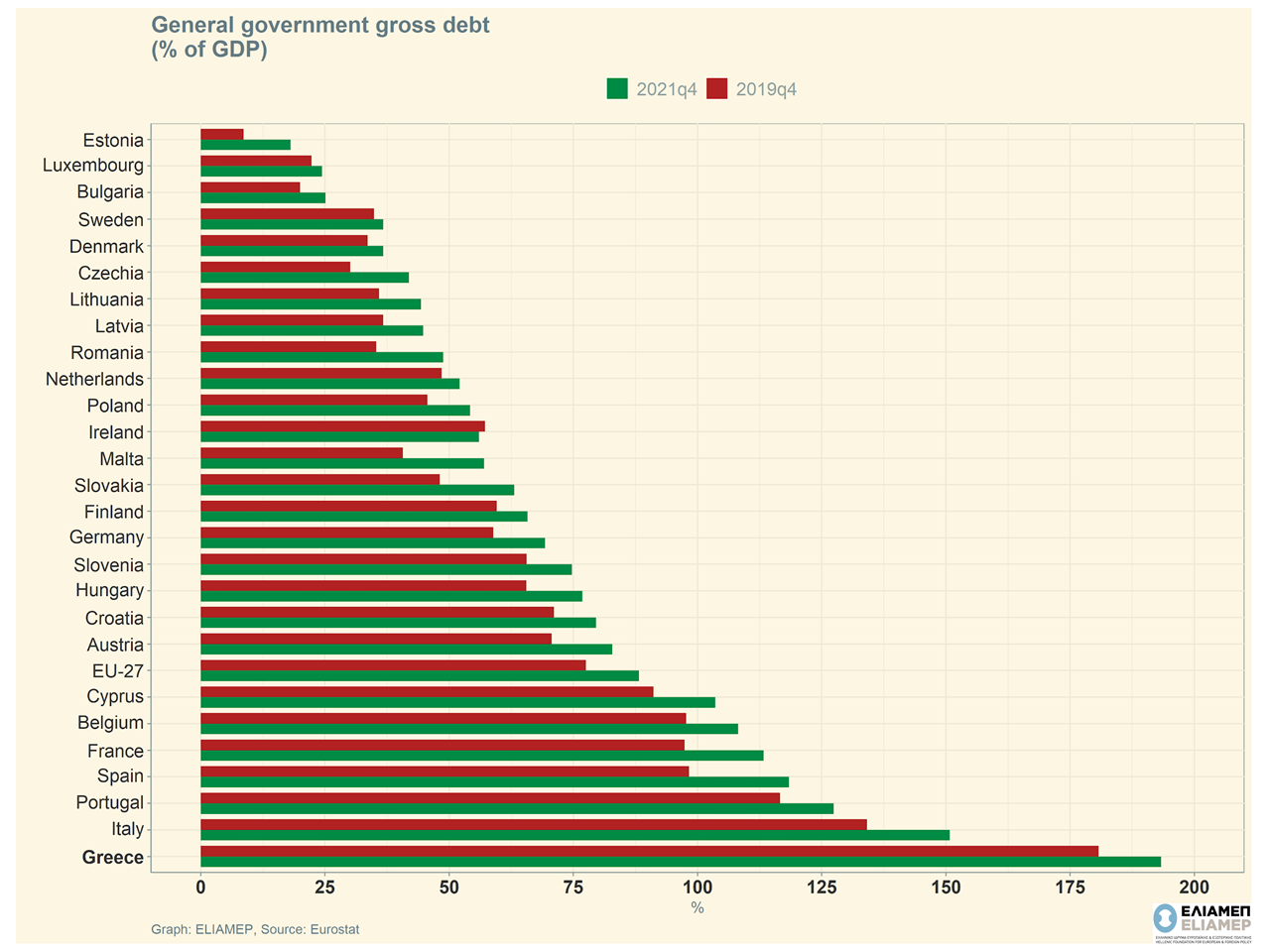 With the ECB announcing interest rate hike, after a long period of near-zero borrowing costs, and the end of the asset purchases program, Europe is once again facing the problem of widening spreads, ie the difference in government bond yields between Germany and countries like Italy (or Greece), not because their economies are a source of concern but because their debt is high.

The Greek and Italian ten-year bond yields have already jumped to above 4%, while also the Spanish and Portuguese moved to levels close and above 3%. Rising yields are raising debt service costs, narrowing the scope for fiscal policy and depriving governments of fiscal space. In this way, high government debt fragmented the European sovereign debt market, hampered the normalization of the ECB’s monetary policy, and made economies of the periphery more vulnerable.

In Greece, the high level of debt is a chronic problem which, as elsewhere in Europe, has intensified due to the pandemic. Within two years, the decline in GDP due to lockdowns in conjunction with measures to support the economy caused government debt to rise from 180.7% to 193.3% of GDP.

The increase in public debt was common in all Member States. The European strategy from the beginning of the crisis called for an increase in state aid to businesses and households to withstand the strong but temporary shock of the pandemic (see previous note). Part of this strategy is the EU decision to activate the Stability and Growth Pact escape clause as early as 2020 (and to maintain it for 2023), so that Member States have the necessary fiscal space during the pandemic, as well as in the recovery phase. Therefore, all European economies have pursued an expansionary fiscal policy: on average in the EU-27, public debt increased from 77.5% at the end of 2019 to 88.2% at the end of 2021, with the countries of the South leading the way: Spain (118.4% of GDP), Portugal (127.4%), Italy (150.8%), Greece (193.3%).

But the fiscal problem has changed in nature compared to the recent past. The high level of debt of European economies does not raise solvency issues, but rather limits states’ ability to draw liquidity from international markets. A typical example is the Greek debt which, despite its amount, is considered safe: a large part of it is “locked” with low interest rates and long-term maturities. At the same time, the positive growth rates of European economies, despite recent difficulties, are contributing to sustainable debt service.

But the risks should not be underestimated. The current circumstances put the ECB in a dilemma. On the one hand, inflationary pressures are forcing it to end quantitative easing and raise interest rates. On the other hand, restrictive monetary policy threatens to undermine the recovery of the European economy, to intensify market fragmentation, and to jeopardize the financial stability of the Eurozone.

Greece has the highest debt / GDP ratio in the EU, so the risk for our country is greater. The temporary easing of EU fiscal rules does not allow for waste, nor, of course, for pre-election spending. The new conditions require prudent management, with special care in order to maximize the growth effects of the investments financed by the RRF and the new NSRF.