In focus – Pandemic and turbulence in government bond markets 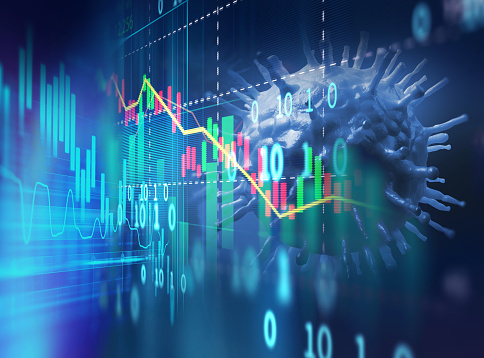 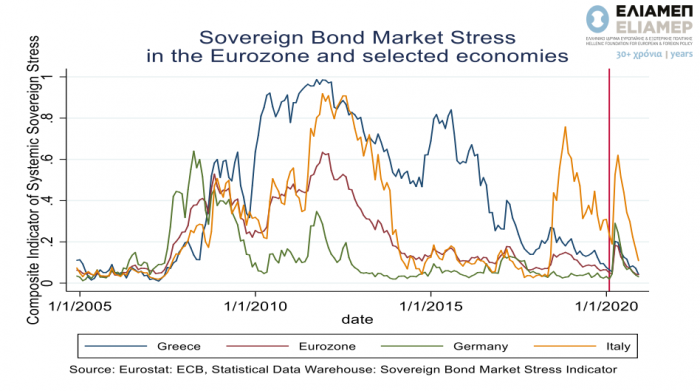 The Covid-19 pandemic has caused unprecedented upheaval in most areas of economic activity in the Eurozone economies. It would be paradoxical for a crisis of this magnitude to leave the financial markets, and in particular the government bond markets, unaffected.

Typically, the impact of shocks in government bond markets is measured by using spreads, i.e. by comparing the difference in yields between government bonds, one of which is considered a safe asset. While yields are mainly influenced by the performance of the countries being compared, there are also factors that upset the bond market as a whole, affecting important parameters, such as liquidity conditions.

The chart shows the Composite Indicator of Systemic Sovereign Stress for selected Eurozone countries for the period 2005 to 2020. The index is constructed by the ECB and reflects the shocks in the bond market for 11 Eurozone countries taking values ​​from 0 (market stability) to 1 (market volatility). The red line indicates the time point when the Covid-19 crisis began in January 2020.

As the chart shows, the shocks that bond markets are experiencing are heterogeneous in size and asynchronous for the different members of the Eurozone for most of the period. The differences between the countries peak during the Eurozone crisis, with Greece for a long time recording high levels of instability, and on the other hand Germany displaying, with the exception of the first period of the crisis, stability.

The period of the first months of 2020, when the pandemic started, seems to have triggered an increase in pressures, both in the Eurozone as a whole and in the individual economies we focus on (Greece, Germany, Italy). The intense epidemiological crisis faced by Italy seems to be reflected in the trends in government bond markets. On the contrary, the performance of the bond market for Greece seems to be in line with that of the Eurozone and Germany, a phenomenon which had not been observed in the period since the beginning of the Eurozone debt crisis until now.

Finally, despite the heterogeneous fluctuations of the markets during the pandemic, the index shows a significant decline for all countries after the first quarter of 2020, reflecting the restraint that gradually prevailed in the markets. Undoubtedly, the timely and bold intervention of the European Central Bank (ECB), whose measures included a program of temporary purchase of assets amounting to 1,350 billion, played an important role in reducing the shock. Greece was eligible for these measures.