In focus – Pandemic and Household Consumption in Europe 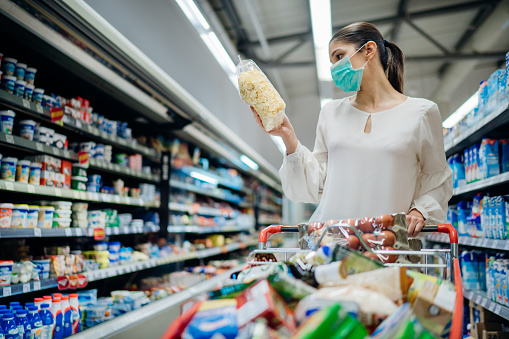 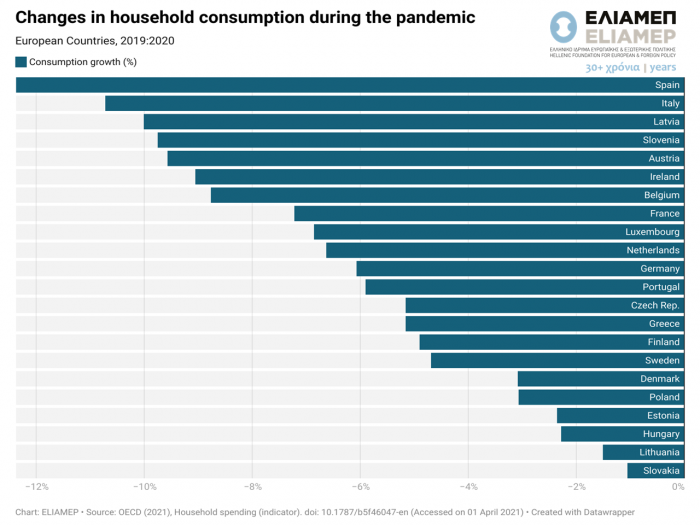 The recession caused by the Covid-19 pandemic has affected household consumption in EU countries. Consumption is a critical variable for the exit from the recession as it absorbs about 60% of the total product in developed economies and therefore its behavior will significantly affect the speed of the recovery.

The graph shows the percentage change in consumption between 2019 and 2020. We observe that households in European economies reduced their consumption in all countries, while the average change was -6.2%. There is, however, a great deal of variation between economies. The countries with the largest decline were Italy and Spain, with reductions of 12.3% and 10.7% respectively. These two countries also experienced the biggest recessions in Europe. In contrast, countries such as Slovakia and Lithuania recorded the weakest decline in household consumption (1% and 1.5% respectively). Greece is slightly below the average with -5.9%, despite the fact that it recorded the third deepest recession in Europe.

The drop in consumption was expected, on the one hand, due to the strong impact of the restrictive measures in tourism, catering and retail, and on the other hand, due to the great uncertainty associated with the pandemic. Despite the negative effects of declining consumption, the fact that unused resources have been saved and can therefore fuel future consumption or investment when restrictive measures will be eased, leaves some room for optimism.

The degree of this optimism depends on the magnitude and nature of the decline in consumption in each economy. The decline may be related to the intensity of the measures and the depth of the recession, but also to the margin that is available to households to reduce consumption. For example, in weaker economies, where large numbers of households spend a large portion of their income on essential products such as food and bills, consumption is not flexible. In contrast, in richer countries where households spend a larger share of their income on luxury items, consumption is exhibits higher elasticity and it is more easily adapted to crises such as the pandemic. The variation in elasticity with respect to income may, therefore, partially justify the adjustment of consumption to the Covid-19 crisis.

To sum up, although at a first glance the sharp drop in consumption is considered a bad omen, insofar as it is related to the high elasticity of demand, it could translate into a faster recovery at the end of the pandemic, at least for some economies.