In focus – The net wealth of households in the euro area 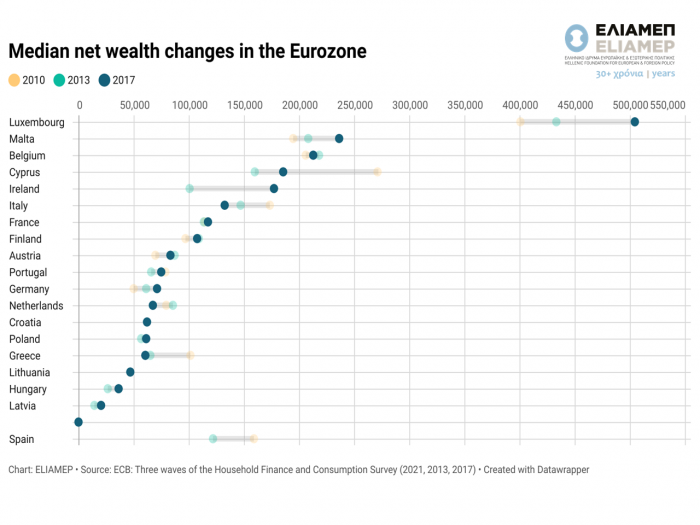 Measuring the standard of living of households in an economy is usually measured by the level of disposable income. However, equally interesting is the depiction of the net wealth of households and its comparison between different economies. While income reflects living standards today, wealth may predict living standards in the future, as the household can draw on it to consume after leaving the labour market or if its income inflows are reduced. At the same time, wealth is linked to economic power as it can be translated into capital to be invested and the ability of a household to acquire housing.

The chart above shows the median net wealth of euro area households, as estimated by the three waves of the ECB’s Household Financial Consumption Survey for the years 2010, 2013 and 2017. Although the latest available data do not include the pandemic period, we can draw some early conclusions about their evolution. Net wealth is defined as the difference between all assets of a household (real estate and financial) and all its loan obligations.

The economies in which households have the highest median net wealth figures according to the latest available data for 2017 are Luxembourg (€504,900), Malta (€236,051) and Belgium (€212,711). On the contrary, the countries with the lowest levels of net wealth are Latvia (€20,200), Hungary (€36,288), and Lithuania (€46,300). The net wealth of households in Greece is estimated at 60,100 euros, having declined substantially since 2010, when the fiscal crisis began in the country. It is important to stress that both the differences between countries and the changes that occur are influenced by a plethora of variables such as property prices in economies, deposits, the informal economy, etc.; in order to compare them we need to harmonize the figures according to the purchasing power of each economy. Still, they paint a picture of the large wealth differential of households in the various eurozone countries.