In focus – Economic recovery and consumer confidence in Europe 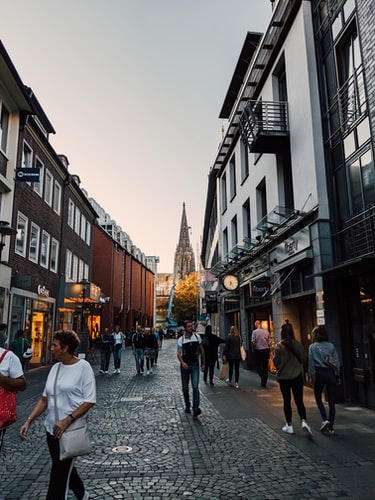 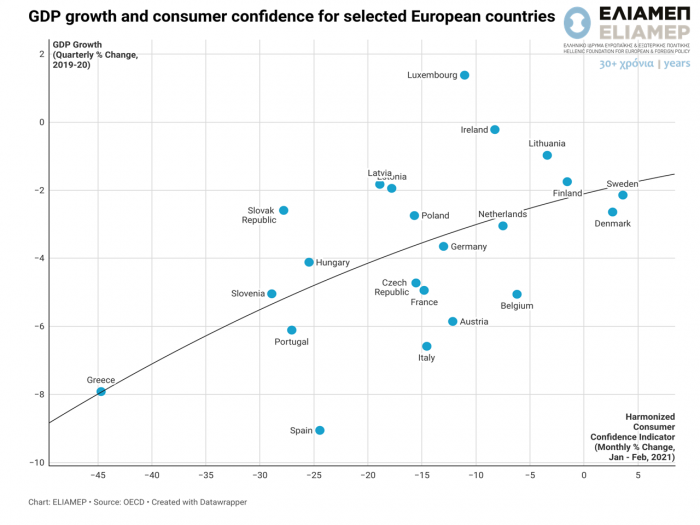 In 2020, European economies experienced the deepest recession recorded in peacetime. The figures for the last quarter of 2020 were encouraging as the recovery that began in the third quarter seemed to continue, although the economy remained in negative territory compared to 2019. Specifically, the 27 EU countries recorded a recession of 4.6% compared to the corresponding quarter of 2019, according to OECD data.

How much will economic conditions improve in the coming months? The European Commission’s winter economic forecast for 2021 predicts that the Eurozone economy will grow by 3.8% and the EU economy by 3.7%. As consumer expectations affect the speed of the recovery, it is interesting to see how their confidence in the economy is shaping up.

The chart shows the relationship between economic growth in the 4th quarter of 2020 compared to the 4th quarter of 2019, and the harmonized index of EU consumer confidence drawn from the OECD database. The harmonized index of consumer confidence is based on the answers to the expected change in the next 12 months in relation to: 1) the financial situation of the household, 2) the general financial situation, 3) unemployment, and 4) the savings of the household. The respondents are given five different options (much better, a little better, same, a little worse, much worse) and the final confidence index is expressed as the balance of positive versus negative replies. The data we present concerns the first two months of 2021.

Based on the data presented in the graph, we can make three observations.

First, as we would expect, there is a strong correlation between the current course of the economy and expectations for recovery. This is shown by the positive trend of the trend line, which shows that, in general, consumers in the countries that experienced the smallest recession in the last quarter are more optimistic than their counterparts in countries with a major recession.

Second, regardless of the current economic trajectory, consumers of the European North (Sweden, Denmark, Finland, the Netherlands) are significantly more optimistic than consumers in the European periphery (Greece, Spain, Portugal), who are quite pessimistic, along with consumers from the countries of Central Europe. An exception to this pattern is Lithuania, whose economy, however, has shrunk only slightly. Given that the intensity of the pandemic does not seem to shape the pattern -as consumers in some countries that have handled worse the pandemic are more optimistic than consumers in countries that have done better- the difference between the North and the periphery might be attributed to the different levels of institutional trust and the corresponding insecurity -in the periphery countries- about developments after the end of the restrictive (and protective) measures.

Third, the case of Greece shows by far the highest rates of consumer pessimism. Beyond the magnitude of the recession, this result is likely to be driven by the very high unemployment rates that characterize the Greek economy after the crisis of the last decade and the consequent increase in economic insecurity.

As the speed of recovery will be partly shaped by consumer expectations, improving their confidence will be important for the country’s transition to a steady recovery rate during this year.