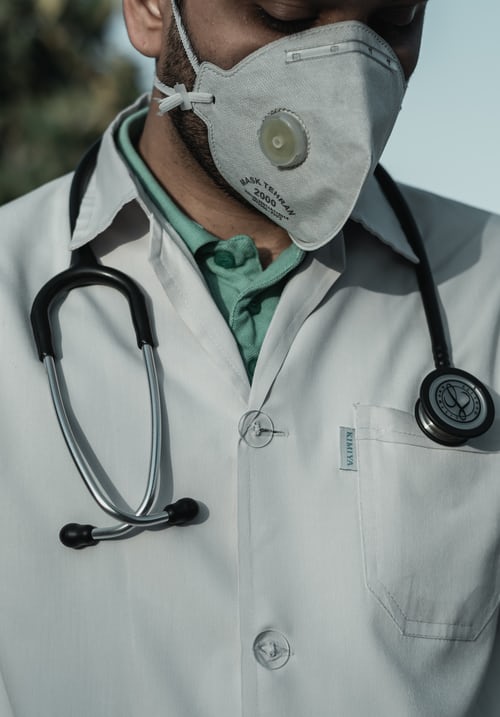 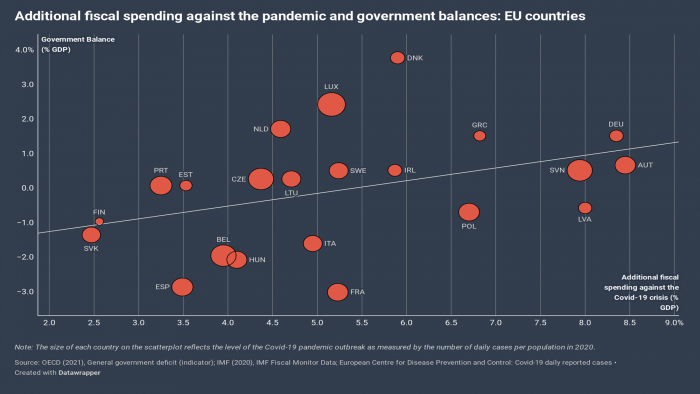 The economic crisis resulting from the Covid-19 pandemic has prompted European governments to launch unprecedented packages of fiscal support to prevent the catastrophic consequences of the crisis. As we pointed out in a previous article in this column, the size of the fiscal stimulus has varied greatly between European countries. We argued that this diversification can be better explained by the economic prosperity of different member states and less by the varying intensity of the pandemic.

In this note we examine whether the diversification in the additional fiscal support packages can be attributed to the available fiscal space, in addition to the degree of economic prosperity, of each economy. The rationale is the following: regardless of the wealth of an economy, the ability of a government to support it in times of crisis is expected to be a function of its fiscal balance. The latter determines the available fiscal space, as well as the possibilities of its expansion through lending, since a surge in government deficits and consequently public debt, may close access to markets in the future. In addition, politically, although the EU agreed to ease fiscal rules during the pandemic, the European Commission, in its report on the European Semester last November, emphasized that in countries with high public debt (Belgium, France, Greece, Italy, Portugal, Spain), it is important to ensure fiscal sustainability when taking additional fiscal measures.

In order to chart the above relationship, we refer to the data of the IMF Fiscal Monitor and specifically to the database of budgetary measures for the Covid-19 pandemic for Europe. We use the variable ‘above the line measures’, i.e. measures that refer to increases in public expenditures and reductions in tax revenues that directly affect economic activity through tax multipliers. This variable is reflected in the horizontal axis of the chart (additional fiscal support) and is contrasted with the fiscal balance of the countries in the vertical axis, with the latter reflecting the fiscal capacity of each economy. The red circles that represent each country vary in size depending on the intensity of the pandemic, calculated as the number of cases per 100,000 people with a rolling average of 14 days.

We observe a positive correlation between the fiscal space as measured by the fiscal balance and the fiscal support ratio. In other words, in general, governments with surplus budgets committed to more generous fiscal support than those with deficit budgets. It is noteworthy that countries with budget deficits, which according to the European Commission, face challenges in their debt sustainability (Belgium, France, Italy, Spain) have made modest increases in budget expenditures to address the pandemic to the extent of 3-5% of GDP. In contrast, countries with zero deficits and/or surpluses, such as Germany, Austria and Slovenia, increased their spending significantly (8-9%). An interesting exception is Greece, which, despite being included among the countries with serious fiscal challenges, due to its high public debt, incurred additional expenditures of 6.5% of GDP. Obviously, the achievement of high budget surpluses, in the context of the fiscal targets and constraints that have been set for the country, have allowed a higher level of spending during the pandemic.