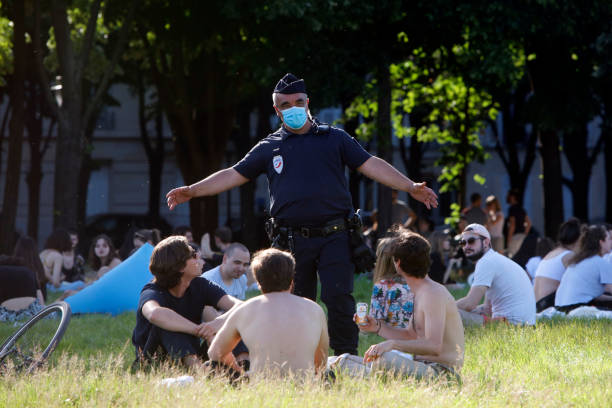 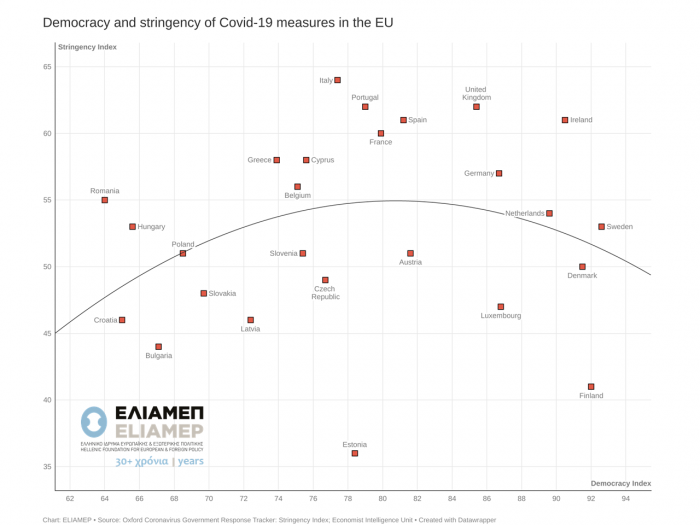 In the previous post of this column, we saw that the democracy index, as measured by the Economist Intelligence Unit, fell significantly both in the majority of EU countries and in the rest of the developed world. An obvious explanation for this decline is the adoption of restrictive measures during 2020 to contain the pandemic. Analyses at the beginning of the pandemic argued that countries with limited democratic freedoms, such as China, could do better in implementing such measures. How does this argument fare in the case of the EU countries? When we look at the data, we see that the relationship between the level of democracy and the intensity of the restrictive measures is not so clear.

In the chart we compare the latest data of the Economist democracy index for the year 2020 (horizontal axis), with the stringency level of the measures against Covid-19 for the same year, which we drew from the Coronavirus Government Response Tracker of the University of Oxford (vertical axis).[1] Both indicators take values from 0 to 100.

We note that the relationship between the level of democracy and the stringency of the measures taken by the governments, changes as we look at countries with different levels of democracy. In countries with a low democracy index (Bulgaria, Croatia, Hungary, Poland, Romania) there is a positive correlation between the two variables. In other words, the less democratic countries have taken looser measures, a finding that contradicts the hypothesis of the studies mentioned above. This may be due to the high levels of populism that characterizes some of these countries, but could also be due to the limited accountability of the rulers, who can forgo the protection of vulnerable population groups to limit the impact on the economy. In states with moderate levels of democracy (Austria, Belgium, France, Greece, Italy, Spain, Cyprus, Slovenia) there is no clear correlation with the stringency index of the measures taken. The most likely explanation is that the measures taken corresponded to the intensity of the pandemic in these countries. Finally, in countries with increased levels of democracy, such as the Nordic countries, the Netherlands and Germany, we see a negative correlation between the democracy index and the intensity of the measures taken. In other words, in this category, countries preferred not to take strict measures.  This could be credited to the liberal culture of these countries, which leaves no room for a significant restriction of individual freedoms, as well as the high levels of trust between state and society, which leads citizens to voluntary compliance with government recommendations without the need to impose strict prohibitions. There are two exceptions in this group, Ireland and the United Kingdom, which have taken extremely strict measures in relation to their level of democracy.

[1] As data is available on a daily basis, we use the index average for the entire year.