In focus – Wealth inequality in the Eurozone 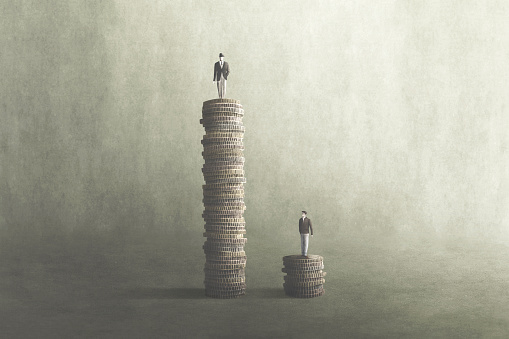 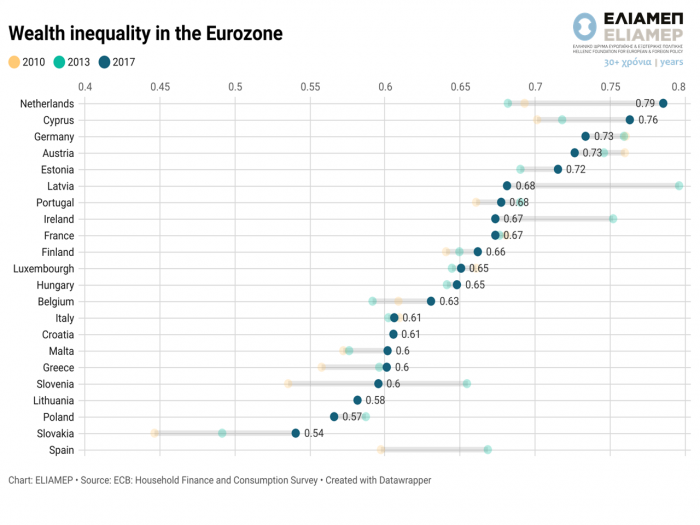 The issue of economic inequalities has become one of the most important topics of scientific research and political debate internationally in recent years. Although the debate has focused more on income inequality, mainly due to the availability of more and higher quality data, a particularly important dimension of the issue of inequality is that of wealth inequality.

The chart above illustrates the progress of the Gini inequality index in the distribution of net wealth in Euro area countries since 2010.

Net wealth is defined as the difference between the total assets and debt of households. The Gini index that measures inequality takes values from 0 to 1, with 0 indicating absolute equality between households and 1 indicating absolute inequality. The chart shows the Gini values for net wealth for 2010, 2013 and 2017, with the latter being the most recent.

We note that in the period following the outbreak of the European debt crisis of 2018, the euro area countries showed great diversification and often large changes in terms of wealth inequality. According to the most recent data for 2017, the most unequal country in the Eurozone is the Netherlands, followed by Cyprus, Germany, and Austria. On the contrary, the countries with greater wealth equality are Slovakia, Poland, Lithuania, and Slovenia. Greece is low in the Gini index rankings, indicating a relatively low level of inequality, but showed increasing trends during the crisis, having changed from 0.55 at the start of the crisis to 0.6 in 2017.

The wealth inequality index gives us important information on the distribution of wealth in the different economies of the Euro area. It should, however, be interpreted with caution, as diversification and change in wealth inequality is influenced by a number of factors such as property prices, the trajectory of the value of financial investments, the level of savings, borrowing, financial literacy, intrafamily transfers and more. Moreover, the distribution of wealth tends to be influenced by macroeconomic policies such as monetary policy and capital gains taxation.