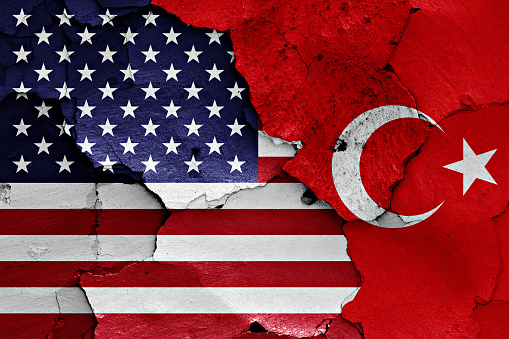 As the American elections are about to take place, many in Turkey brace for the outcome. After countless disputes between the United States and Turkey during the 2010’s, coupled with growing divergence of Turkish foreign policy, two allies’ relationship has been deceptively good for the last two years. This was not due to a meaningful rapprochement, but to Erdogan’s well-executed personal diplomacy with Trump which has proved beneficial for Turkey in many cases. Yet, this superficial rapprochement is challenged by the prospects of a Biden presidency. Biden, whose remarks are far from affable towards Erdogan and who has even pledged to support Turkish opposition, is very likely to demand Turkey to recommit to its alliance with the West. Hence, we may soon see a Turkey at a serious crossroads: either Turkey will turn its face to West once again, or it will further alienate from the West.

“The Turkish government has frequently taken pride in showing its dissent towards the United States, NATO and the European Union.”

It is not news that Turkey has been steering away from the West for a long time. In fact, the list of grievances between Turkey and the West is getting longer, as additional tensions in the Mediterranean and Transcaucasia have recently arisen. Yet, relations between the United States and Turkey in particular have been degrading ever since their divergent objectives in Syria became clear; this was neither the first, nor the last schism between the erstwhile close allies during the last decade. One prime example was Turkey’s purchase of Russian S-400 missile systems, despite the United States and NATO explicit opposition. The Turkish government has frequently taken pride in showing its dissent towards the United States, NATO and the European Union. But when all was seeming to get only worse, a rare saving grace was able to slow down the deterioration of the relations for now: The recent cordiality between the leaders of the two countries, Donald Trump and Recep Tayyip Erdoğan, has been in stark contrast with their relations two years ago, when the detention of the US pastor Andrew Brunson on alleged terrorism charges had brought US-Turkish relations to a low point.

“President Erdoğan has been relatively affable towards his American counterpart, something he has not been towards many other world leaders.”

The personal relationship between Erdoğan and Trump had been indeed a particular point of interest in bilateral relations of the last two years. President Erdoğan has been relatively affable towards his American counterpart, something he has not been towards many other world leaders, as he is rarely shy of quarreling with his real or perceived adversaries. One recent example is his answer to French President Emmanuel Macron who had condemned Turkey’s aggressive posturing in the Eastern Mediterranean. In response, Erdoğan said to Macron “Don’t mess with Turkey… You are going to have much more problems with me.” Although this statement might seem like a singular tactless remark, many observers would agree that such remarks have recently emerged as a defining feature of Turkish diplomacy. Asserting attitude and thinly veiled threats have been a long-used tool of Turkish government to substantiate their discourse on “sovereign Turkey”; in fact, the main aim of this posture was to project a strong Turkey image to the Turkish public.

“One of the major reasons for Turkey’s growing distance to United States has undeniably been this increasingly autonomous foreign policy defined by unilateralism and increasing assertiveness.”

This growing assertiveness was not, however, only for the show. It is reported that Turkish troops are present in about a dozen countries, not least in Libya, which has emerged as a particular focus of Turkish energy and naval interests and in Nagorno Karabakh, where Turkey has fully supported Azerbaijan’s offensive. In the seas, Turkish government has embraced the “Blue Homeland” doctrine that envisages a hegemonic role for Turkey in the Mediterranean, again which is part of the reason recently Turkey has been much more active navally. One of the major reasons for Turkey’s growing distance to United States has undeniably been this increasingly autonomous foreign policy defined by unilateralism and increasing assertiveness. There have been a plethora of conflicts where the tactical and the strategic objectives of the United States and Turkey have diverged. Many of these conflicts were marketed to Turkish public as evidence of a “sovereign Turkey,” independent from foreign –especially US– influence. Hence any foreign criticism aimed at Turkey had little of the intended effect of checking Turkey’s assertive posture; it only helped Turkish government further conjure the image of an interventionist and imperialist West, jealous of Turkey’s increasing control over its own foreign policy. Turkish foreign policy was defined as “local” (yerli) and “national” (millî). This meant that it was devised within Turkey and exclusively served Turkish national interests, according to the interpretation that the alliance of the incumbent Justice and Development Party (AKP) with the far-right-wing nationalist Nationalist Action Party (MHP) has produced.

“Erdoğan and his government have been growing more tolerant towards the United States, despite initial grievances with the Trump administration.”

Nevertheless, Erdoğan and his government have been growing more tolerant towards the United States, despite initial grievances with the Trump administration. It is reported that Erdoğan has diligently built a personal rapport with Trump. John Bolton’s recent memoir has revealed the extent of this remarkable cordiality. Erdoğan called Trump personally at least twice a week, and was put through directly on standing orders from Trump, often bypassing security protocols. Donald Trump’s infamous letter to Erdoğan, in which Trump urged Erdoğan “not to be a fool,” seems to be uncharacteristically forgotten by Erdoğan. This rapprochement is especially noteworthy, since a number of influential pro-government groups in Turkey profess a strictly anti-American stance. One of the flag-bearers of anti-Americanism in Turkey, the Eurasianist group, were even able to inject their “Blue Homeland” doctrine into Turkish foreign policy, which is the major reason why Turkish navy has been growing more unilateralist and assertive in the Eastern Mediterranean. Not only Eurasianists, but also radical conservatives have not surrendered their radical anti-American stance, as they continually name-call the United States, celebrate its perceived decline and declare the end of US hegemony, or even its demise. Despite letting some demands of such groups to be realized such as the July 2020 conversion of the Hagia Sophia museum into a mosque or the belligerence in the Mediterranean, Erdoğan has barely let any of the radical anti-American voices infiltrate his agenda.

“This cordiality is not one-sided, as President Trump praises President Erdoğan extensively. He recently called Erdoğan “a world-class chess player” and “a sharp world leader”.”

This cordiality is not one-sided, as President Trump praises President Erdoğan extensively. He recently called Erdoğan “a world-class chess player” and “a sharp world leader”. Even the Pastor Brunson crisis, arguably the biggest downturn of the relations between the two, is seemingly no more an issue for Trump, as he praised President Erdoğan during the 2020 Republican National Convention at the presence of Pastor Brunson who spent two years in a Turkish prison. Aside from flattery, Erdoğan’s friendship with Trump has several times proven very beneficial for Turkey. Trump’s decision to withdraw US troops from Syria, which blindsided many in the US, was reported to be made instinctively and right after a phone conversation with Erdoğan; the decision that in many ways was a gesture to the Turkish government whose main adversary in the region, the Syrian Kurdish People’s Protection Units (PYD), was now left without US protection. Furthermore, Donald Trump even held off sanctions against Turkey in response to the S-400 deal, despite clear cross-party Congressional support for the enforcement of the 2017 Countering America’s Adversaries Through Sanctions Act (CAATSA). Although the two leaders were able to manage the differences of their countries relatively well for the time being, it is hard to overstate the degradation of the US-Turkey alliance over the years. While the heads of the administrations in both countries may maintain a friendly relationship, on all other levels there is a serious schism. Erdoğan may be in control of his administration, but many radical anti-American groups have been gaining influence and even finding public support in Turkey. There are also other staple problems, such as Fethullah Gülen’s residence in the United States and Turkey’s fierce antagonism towards Israel. As Turkey has not been as unpopular in the US Congress for many decades. This was manifested in fall 2019 when resolutions recognizing the Armenian Genocide, which has been adamantly denied by Turkish governments for decades, was passed with overwhelming bipartisan support in the US House of Representatives and unanimously in the US Senate. In addition to dwindling Congressional support, many State Department and Pentagon officials are also uneasy about Turkey’s aggressive foreign policy. Erdoğan’s relationship with Trump may soon turn fruitless for Turkey. The prospects of a second Trump term are waning, as his opponent Joe Biden leads in the presidential election polls; this is something Turkish government and its allies are quite unhappy with.

“While the heads of the administrations in both countries may maintain a friendly relationship, on all other levels there is a serious schism.”

Joe Biden, who has already openly pledged to follow a different foreign policy than Trump, was never a popular figure in Turkey, being Vice President to Barack Obama. Yet the recent release of the record of a January 2020 interview of his, accusing Erdoğan of being an autocrat and pledging to support the PYD and the Turkish opposition incited outrage in the government-controlled Turkish media. To many this was a confirmation of the overall US government rhetoric supporting the enemies of Erdoğan, both inside and outside Turkey.

“President Biden will most probably require Turkey to reaffirm its commitment to NATO […] and this is troublesome news for Erdoğan.”

It is not likely that President Biden will come guns blazing into the Oval Office regarding Turkey; yet, he will most probably require Turkey to reaffirm its commitment to NATO by severing some of its strengthened ties to Iran and Russia and by abstaining from unilateralist overtures destabilizing its neighboring regions. And this is troublesome news for Erdoğan. On the one hand, if Erdoğan refuses to re-commit to the West, serious repercussions may follow. Turkey’s declining economy, depreciating national currency, the pandemic and ramping opposition have already posed formidable challenges for Erdoğan; without President Trump to alleviate potential backlashes against Turkey, Western repercussions to Turkey’s aggressive outlook could prove devastating. On the other hand, a reaffirmation of Turkey’s commitment to the West might ease the burden on Turkish economy and currency. But, this option would be far from ideal for Erdoğan. The decade-old discourse of the government based on a foreign policy free of foreign influence would lose its substance, and Turkey may have to make concessions in Syria and the Eastern Mediterranean. Moreover, Erdoğan could lose the support of the radical anti-American political groups, and Turkish opposition might even attempt to capitalize on the anti-American sentiment at the expense of Erdoğan.

“The tattering US-Turkey alliance may seem like stabilizing for the last two years, yet this is in many ways a deception; a deep rift lurks underground.”

The tattering US-Turkey alliance may seem like stabilizing for the last two years, yet this is in many ways a deception; a deep rift lurks underground. Many serious problems were swept under the rug by the two presidents, who thus attempted to manage the declining trust between the countries. But as this fragile cooperation and understanding could be reaching an end, a decades-old alliance may come to a serious crossroads if Joe Biden gets elected on 3 November 2020. A Turkey further astray from the West may be a strong possibility soon.