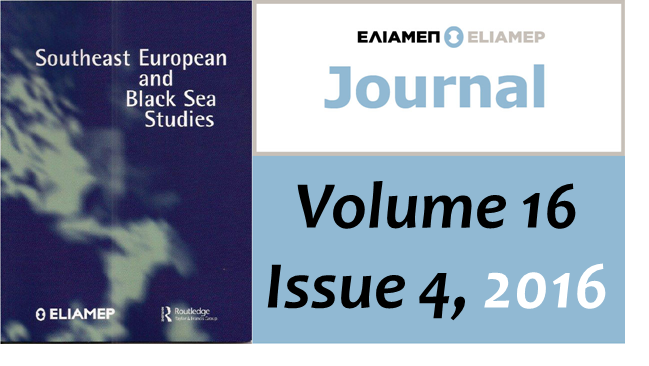 The most recent issue of Southeast European and Black Sea Studies is now available online. This time a special issue, edited by Kerem Öktem & Karabekir Akkoyunlu, both of the Centre of Southeast European Studies, Graz. It focuses on “Exit from Democracy: Illiberal Governance in Turkey and Beyond”, and you can read the editors’ introduction here. Murat Somer contributes a piece about “Understanding Turkey’s democratic breakdown: old vs. new and indigenous vs. global authoritarianism” and  the editors of the issue Kerem Öktem & Karabekir Akkoyunlu have written an article on “Existential insecurity and the making of a weak authoritarian regime in Turkey”. Moreover, the issue includes a piece by Cengiz Günay & Vedran Dzihic on decoding the authoritarian code in Turkey, Macedonia and Serbia, an article by David White & Marc Herzog that examines “State capacity in the context of electoral authoritarianism, regime formation and consolidation in Russia and Turkey”, and work from Orçun Selçuk concerning “populism in Turkey, Venezuela and Ecuador” as well as Bilge Yabanci’s piece about Populism as “the problem child of democracy.” Ahmet Erdi Öztürk and Demet Lüküslü have contributed two interesting articles that analyze the “AKP party’s policies.” The issue also includes pieces concerning the Kurdish issue in articles by Omer Tekdemir on “Conflict and reconciliation between Turks and Kurds” and  Michiel Leezenberg – “The ambiguities of democratic autonomy: the Kurdish movement in Turkey and Rojava”.