Book: From Stagnation to Forced Adjustment: Reforms in Greece, 1974-2010 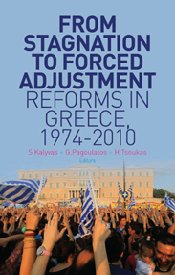 Ever since Greece’s 1974 transition to democracy, there has been constant talk of the need for system-wide political reform. Major changes in the country’s economy, society, and population have forced Greek institutions and policies to become better aligned with those of more developed, West European countries, yet there is still work to be done. Some reforms, such as the creation of the National Health Service, entry into the Eurozone, the liberalization of banking practices, and the privatisation of some business, have succeeded. Others, such as educational, pension, and civil service reforms, reappear now and then yet largely remain elusive.

The Greek malaise, widely felt and discussed in the country, has intensified the desire for more action, yet these efforts have also prompted systematic resistance from organised interest groups, which feeds the broadly perceived sense of inertia and stagnation, or at least truncated progress.  This book edited by Stathis Kalyvas, George Pagoulatos and Haridimos Tsoukas carefully analyses the process of reforms in Greece from 1974 until 2010 and provides a comprehensive study of attempts for their implementation.  It has been published by Columbia University Press. You can find more information on the book here.

Stathis Kalyvas is Arnold Wolfers Professor of Political Science and director of the program on Order, Conflict, and Violence at Yale University. George Pagoulatos is associate professor of politics at the Athens University of Economics and Business. Haridimos Tsoukas holds the Columbia Shipping Company Chair of Organization and Management at the University of Cyprus.